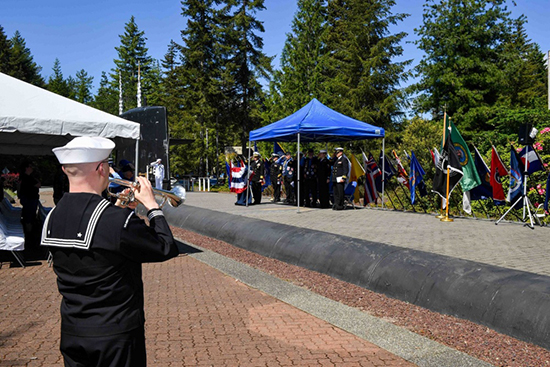 Submarine Group 9 sailors, veterans and visitors  gathered in remembrance of the sailors and submarines that were lost during war at a “Tolling the Boats” observance held at Naval Base Kitsap's Deterrent Park.

In the Navy, a submarine is referred to as a boat.
The observance is held as part of a Memorial Day observance in remembrance of the sailors and submarines lost at sea during World War II.

Honoring Fallen Submariners
Fifty-two U.S. submarines including 374 commissioned officers and 3,131 enlisted members were lost at sea during World War II, according to the Naval History and Heritage Command’s web site.

During the ceremony, a short description of what happened to each submarine is read, followed by the number of sailors lost on the boat.

A ceremonial bell then is rung in memory of each submarine as part of the observance.
Presently, the observance is held to honor and never forget those who gave their lives to protect the nation.

‘We Can’t Ignore Our Past’
“We can’t ignore our past,” said Navy Capt. Ted Schroeder, chief of staff of Submarine Group 9. “It’s important to remember where we came from and to honor the men and women whose legacy we’ve inherited.”

Sailors and veterans came together to salute the fallen.
"This is the best part of the Navy,” said Paul Christoffeson, a World War II veteran. “I joined when I was 17, and my first sub was SS-270 [the USS Raton].”
“We wouldn’t have the freedoms today without the sacrifices of the families and the heroes that we are remembering today,” said Navy Chief Petty Officer Jonathan Corcoran.