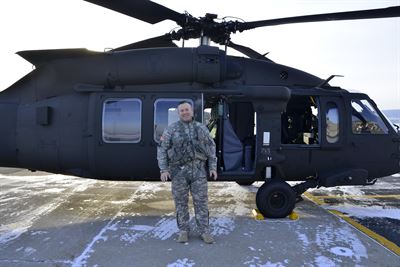 Army Sgt. 1st Class John Thompson, a UH-60 Black Hawk helicopter standardization instructor with the Minnesota National Guard's 34th Combat Aviation Brigade, found his calling as a unit victim advocate and now volunteers in his local community. Thompson is pursuing a degree in human services and plans to work in a related field once he retires from the military. Minnesota Army National Guard photo by Master Sgt. Blair Heusdens ST. PAUL PARK, Minn., April 6, 2016 — Army Sgt. 1st Class John Thompson sits by his phone, ready to respond at a moment’s notice to assist people who’ve been victimized and are at one of the lowest points in their lives. He’s not a police officer or firefighter, but he often finds himself responding at all hours of the night.

Thompson’s experience as a victim advocate in the Minnesota National Guard and as a volunteer in his community has opened his eyes to a problem that persists not only in the military, but also in the civilian world.

Thompson is a UH-60 Black Hawk helicopter standardization instructor with the Minnesota Army National Guard’s 34th Combat Aviation Brigade. He’s found that in the last few years of being a victim advocate, it’s not always about what he says, but the compassion and empathy that he shows that helps victims of sexual assault

“A lot of times, you don’t even have to say anything,” he said. “You can just say, ‘Do you want to talk about what happened?’”

After more than 30 years of working as a mechanic on aircraft, Thompson is now looking in a different direction for his next career. He holds a bachelor’s degree in criminal justice administration with a focus on human services and plans to pursue a master’s degree in the human services field.

“I’m finding myself more and more drawn to this field -- the social services,” Thompson said. “Even the 10-year-ago-me, I never would have thought that this would be the direction I was heading in. I thought aviation -- airport management or something like that -- was going to be my next step, but not any more. Now, it’s going to be something in advocacy or human services. That’s where I see myself in the future, and it’s all because someone said, ‘Hey, maybe you should volunteer out in the community.’”

It’s a role Thompson didn’t immediately choose. As his unit was preparing to deploy in 2011, its leaders needed someone to fill the role of victim advocate, and he was selected to attend an 80-hour course in Virginia.

“It was another week away from my family right before deployment, so I wasn’t super excited about it, but I recognized the need, and I went,” Thompson said. “Once I got there, it was a lot of eye-opening experiences about the scope and size of the problem the military has with sexual assaults.”

Going through the class, Thompson said, he felt comfortable conducting sexual assault briefings, but wasn’t sure he was prepared for the other aspect of the role -- responding to victims after they’ve been assaulted. He knew that statistically, women are more likely to be victims of sexual assault, he said, and he was worried that as a man, he might not be the person someone would want to see at that difficult time.

“That part of it kind of terrified me, to be honest with you, and it still kind of does,” he added.

“I think having a strong male presence sends a message that men are compassionate, caring and will believe a victim without judging them,” Diaz said. “I feel males in this role are extremely important. They play an essential role in changing the culture surrounding sexual assault.”

Gaining Experience in the Community

It was the Minnesota National Guard victim advocate coordinator who suggested that Thompson volunteer in the community to gain experience and confidence. He linked up with 360 Communities, a nonprofit organization that provides many programs and services that include domestic violence shelters, resources, food shelves and programs that support school success. To volunteer as a victim advocate, Thompson had to attend a 40-hour training class. At the class, he was the only male advocate and, he found out later, the only male advocate they’d ever had.

“I got some funny looks, and a little bit of hostility in a way, and to be honest, my initial feeling was that they were looking at me like I was part of the problem, like I’m the enemy,” Thompson said. “And I said, ‘Listen, I’m not going to apologize for the fact that I’m a male. All I can tell you is that I’m here to help.’”

After going through the course, he said, the other participants and the staff gradually came to realize that his heart was in the right place and that he was there to help. Thompson still had reservations, though, about whether he would be ready when the time came to respond to a victim.

Thompson said he remembers driving to the hospital in the winter with the windows down and having to take a minute to calm himself before he went in.

“I opened the door and I walked in and -- this speaks to the prejudicial view we have on sexual assaults -- I walked into that room expecting to find a female victim, and it was a young man,” he said. “And I was just like, ‘Now what do I do?’ because all of the resources that I had were meant for female victims.”

Since that first call, Thompson said, he has become more comfortable and confident in his abilities. He listens and provides support, offers resources and gives victims the power to make their own choices about what to do. He’s also had to learn how to set his emotions aside and remain neutral so he can focus on supporting the victim.

“That’s one of the biggest things, I think -- if you go in there and you just look at that victim as a person who’s had something taken away from them,” he said. “We’re not there to judge -- What were you wearing? Why were you out this late? Why did you drink so much? Why didn’t you know better? -- we don’t ask those why questions. We ask the how: How can we help? or What can we do to help you?”

Thompson’s passion for advocacy brought him to Washington, D.C., in 2014 for a year-long tour as an instructor at the National Guard Bureau, teaching the 80-hour Sexual Harassment/Assault Response Program course for victim advocates. One of his biggest challenges, he said, was convincing soldiers to change the way they’ve traditionally done things in the past to help change the culture in the organization at large.

“We tell all these new advocates, “First and foremost, you’re agents of change, because the message in the Army is we want to change the culture, and the culture is still in need of change,’” Thompson said.

“If you were working at IBM or Target, would that kind of behavior be accepted? Not at all,” he continued. “You would be in jail for doing that kind of stuff. So if we’re trying to project this image of the Army as a profession or that we’re professional soldiers or professional warriors, well, that’s not how professionals operate.”

While advocacy may have been an unexpected path for Thompson, it’s a calling he’s found to be personally rewarding.

“I think I get more out of it than I put into it, or at least 50/50,” he said. “When I go and respond to a case and see the initial state that that victim’s in, they’re at one of the lowest points that they’re going to be, and if over the course of however long I’m going to spend with that victim I can change that and make it a little bit better, then I think I’m doing a good job.”

Diaz said she sees Thompson as an important asset to the Minnesota National Guard’s Sexual Assault Prevention and Response Program.

“Sergeant First Class Thompson is caring and compassionate,” she said. “He believes the victim and has a genuine concern for their well-being. He exudes a passion for combating sexual assault, and that passion makes others want to do the right thing.”