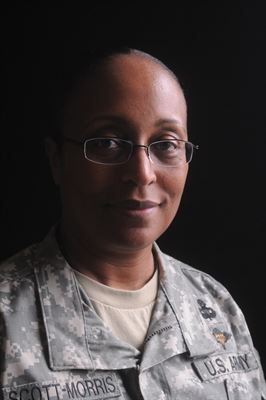 Army Sgt. Maj. Tonika Scott-Morris, sergeant major of the Quartermaster School's Aerial Delivery and Field Services Department, will soon end a 28-year career as a parachute rigger. She is only the second women to hold ADFSD's top enlisted position. Army photo by Terrance Bell FORT LEE, Va., April 8, 2016 — The moment paratroopers leave the relatively safe confines of an aircraft, they relinquish control of their lives to the scales of fate that teeter between life and death.

Army Sgt. Maj. Tonika Scott-Morris, a self-proclaimed thrill-seeker and the top enlisted rigger at the Quartermaster School’s Aerial Delivery and Field Services Department here, is familiar with that prospect of danger. She has lived with it and helped other airborne-qualified soldiers cope with it for many years.

Scott-Morris, a 48-year-old wife and mother of four, will shortly end a 28-year career as a rigger, logging well over 150 jumps out of an assortment of aircraft without ever feeling the unsettling discomfort of fear.

“What I had was excitement,” the Florence, Alabama, native said. “I’m like an adrenaline junkie.”

Soldiers who are training to become riggers -- those who pack, inspect, maintain and repair parachutes for troops and who rig supplies and equipment for aerial delivery -- are required to be airborne-qualified. About 3,000 personnel from all branches of the military and allied nations undergo training here on a yearly basis.

Only the second woman to lead ADFSD as its sergeant major, Scott-Morris completed a three-year stint in the same position four years ago and returned here in 2014 after a deployment to Afghanistan. But an injury she sustained years ago ended her ability to jump, typically a traumatizing occurrence for many career-long paratroopers.

“I had to weigh my quality of life [after retirement],” she said, referring to her decision to follow doctors’ advice to stop jumping. Despite the fact she is now a leg -- airborne lingo for those who don’t jump -- Scott-Morris hard-charged into her current duty assignment.

“My inability to jump didn’t affect my ability to lead,” she said.

Caring for Her Family

Scott-Morris’ love for the free-floating sensation of jumping originated out of necessity. She joined the Army in 1987 as a 20-year-old single mother on a mission to adequately provide for her child. When the recruiters told her she could get paid an extra $100 for being a rigger, she pulled the “yes” trigger with signature decisiveness. She explained why it was an easy choice.

“When I came in as an E-1, if I had not received housing allowance and jump pay, I would be getting about $400 a month,” she recalled. “With the housing allowance and the extra pay for being a rigger, I think I walked away with $650 a month. My whole motivation was, one, to make my father, a Korean War and Vietnam veteran, proud; two, I wanted to make sure I took care of my son and not rely on someone else.”

Choosing a job to support your family is one thing, but love and passion for the craft is something else. Unfortunately, Scott-Morris’ zeal for rigging and airborne operations wasn’t shared by her first husband, also a soldier. He had strongly urged her to change her occupation and quit jumping.

“I said, ‘Why?’” she recalled. “He said, ‘I’m afraid for you, and I don’t want you to get hurt.’” She thought about what he said and determined she did not want to change her military job.

It was yet another occasion when Scott-Morris showed the capability to take decisive action.

Scott-Morris decidedly has no regrets about her decision, although many might argue it was not in the best interests of her family. If that is the case, a good number of riggers -- male and female -- are in the wrong occupation.

“I thought about my family first,” Scott-Morris said. “I made the best choice for them.” She has remarried and now has a blended family. Her biological 30-year-old son is a college graduate and her 24-year-old daughter is on the verge of completing culinary arts school. “They were never left without anything. My children are spoiled -- not because I gave them everything, but because they know what quality of life is. They know the sacrifices I made.”

“My father told me if you have to dig ditches and shovel poo to take care of your family, you’d better be the best ditch-digger and poo-shoveler in the world,” she said.

Scott-Morris’ confidence, decisiveness and independence served her well in the male-dominated rigger career field. Although women make up only about 1 percent of the more than 2,000 riggers, she never felt like she was working at a disadvantage, despite the fact she said she received more challenges to her authority and expertise than most of her male counterparts.

Tania Davis, a Bull Dental Clinic employee who was assigned with Scott-Morris in Hawaii during the early 1990s, said she was fully attuned to airborne culture and understood what she was up against.

“She learned that, one, nobody was going to respect you; you would have to earn everyone’s respect,” Davis said. “Two, you can’t let someone brow-beat you, especially when you know you’re right. Three, you have to be tougher mentally and physically to show ‘I can do what you can do, and I can do it better.’ Don’t tell them about it, but go about showing them. By doing those things, she would not only gain their respect, she was able to excel as well.”

Scott-Morris said she was taught the trade by Vietnam-era warrant officers who stressed being tough and standing one’s ground. “And the best way to stand my ground was to be a respectful, be professional and be the subject matter expert of my craft,” she said. “Don’t let anyone else who is not a parachute rigger tell you how to be a parachute rigger.”

Professionalism was not the only challenge Scott-Morris faced. All riggers face a time when the body can no longer endure the physical demands of jumping. That’s whether they’ve been worn down from performing the practice over many years or they have suffered injuries from a few jumps.

In other words, all paratroopers have a shelf life. Scott-Morris rested her jump boots after an injury she thinks she suffered sometime in 2011. She officially ended her jumping career in 2012 but still feels the satisfaction of nurturing young troops.

“I was told by a physical therapist and orthopedist I have the back of a 65-year-old woman,” she said. “And I feel it. I hurt every day, but when you’re on the drop zone and you’re seeing the work you’ve done in helping civilians become soldiers and the soldiers become parachute riggers … you’re just like a proud mother or father when you see your child graduate from high school or college. You’re like, yeah, that’s what I do.”

To be more accurate, that’s what Scott-Morris used to do. She said she never lost sight of the inevitable, did not cling to her profession too tightly and has plans after the Army. Those include hard-charging into a bed and breakfast enterprise.

“There’s more to me than just the Army,” she said.