Meet Your Military: Filipino-American Airmen Enjoy Duty in the Philippines 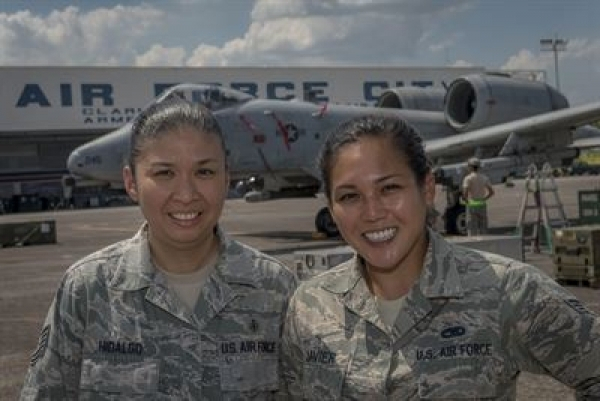 Air Force Tech. Sgt. Kathlyn Hidalgo, left, an independent-duty medical technician with the 25th Fighter Squadron, and Air Force Senior Airman Nikkie Javier, right, a precision guided munitions crew chief with the 51st Munitions Squadron, both deployed from Osan Air Base, South Korea, pose for a photo in front of an A-10C Thunderbolt II at Clark Air Base, the Philippines, April 22, 2016. Hidalgo and Javier are two of three Filipino-American airmen serving U.S. Pacific Command’s new Air Contingent in the Philippines. Hidalgo is from Guiguinto, Bulacan, the Philippines, and Javier is a Norwalk, California, native. Air Force photo by Staff Sgt. Benjamin W. Stratton CLARK AIR BASE, Philippines, May 2, 2016 — Asian-Pacific Americans have fought and served with the U.S. military for more than a century. That legacy continues today with three Filipino-American airmen deployed with U.S. Pacific Command’s Air Contingent here, where they fulfill a number of roles, ranging from medical support to aircrew flight equipment and aircraft maintenance.“Knowing I am supporting the mission while working alongside the Philippine military makes me so proud of where I'm from and what I'm doing,” said Air Force Staff Sgt. Jay Perocho Acasio, an aircrew flight equipment journeyman with the 51st Operations Support Squadron, Osan Air Base, South Korea.

Acasio hails from from Ozamiz City in the Misamis Occidental, the Philippines. “I've had the opportunity to talk with the Philippine pilots and show them what I do. Seeing how excited and interested they were really made me glad I'm here,” he said.Similarly, Air Force Tech. Sgt. Kathlyn Hidalgo, an independent-duty medical technician with the 25th Fighter Squadron at Osan and a Guiguinto, Bulacan, Philippines, native, explained how she draws strength from her heritage while serving at home as a U.S. airman.

“It makes me feel so proud to be both an American airman and a Filipino,” she said. “To be able to serve the country I hold citizenship in and the country I grew up in at the same time is such an honor. Looking at myself wearing the U.S. Air Force uniform and to be in my home country, … I have no words to describe how I feel.”Airmen join the Air Force for a number of reasons, but for these Filipinos, serving in the U.S. armed forces affords them an opportunity for their military commitment to transcend serving a single nation."Knowing that my service benefits not only the U.S. and Philippines, but the international community, opens my eyes to a broader view of the military,” Acasio said.

"We have so many diversities serving in the U.S. military, and knowing that as a U.S. airman working with the military of the country I was born in … it just amazes me."I have gotten a few questions from Filipino military members about my national background,” he continued, “and it makes me proud to say, 'I'm Filipino, serving in the U.S. military.’”A long line of Filipinos have served in the U.S. armed forces, dating as far back as the War of 1812. While the battlefields have changed, their commitment to service remains the same.“I wanted to be a part of the U.S. Air Force,” said Senior Airman Nikkie Javier, a precision guided munitions crew chief with the 51st Munitions Squadron at Osan and a Norwalk, California, native, whose family moved to the United States from the Philippines.

“Our mission here is very important, because we’re here supporting our Filipino allies,” Javier said. “We don’t take our allies for granted, and instead show the world where we stand, side by side with the Philippines. It makes me proud to be a part of something so great.”Both nations benefit from Filipino airmen serving in the U.S. military, as they are able to translate cultural differences in a way both nationalities can understand, the airmen said.“I feel like I am a liaison or bridge for both countries,” Hidalgo said. “I am able to explain what is going on to my fellow airmen and, likewise, to the Filipinos. No matter how big or small a country is, we need each other’s support, and that’s really why we are here -- supporting our friends and for me, my family, too.”

Hidalgo hadn’t been back to the Philippines for seven years. “It’s so good to be home,” she said. “Just being able to interact with Filipinos on a daily basis is … amazing!”Hidalgo, Acasio and Javier are here with new Air Contingent created at the invitation of the Philippine government, using the airmen and aircraft already in place at the conclusion of the recently concluded Balikatan 2016 exercise. The purpose of the Air Contingent is to help build the capacity of the Philippine air force to address local and regional security concerns. These three Filipino-American airmen are serving both countries as a result of the partnership.

“I’ve seen the sacrifices service members make to keep our nations free,” Javier said, reflecting on her reasons for joining the U.S. Air Force. “I’m humbled to be here and a part of this mission.”“The Air Force has given me hope,” Hidalgo said. “It has given me the motivation to work harder and be better -- excellence in all we do. I mean, here I am back in the Philippines and serving at home. No other job can offer this, and it’s exciting to share that hope with my fellow Filipinos.”