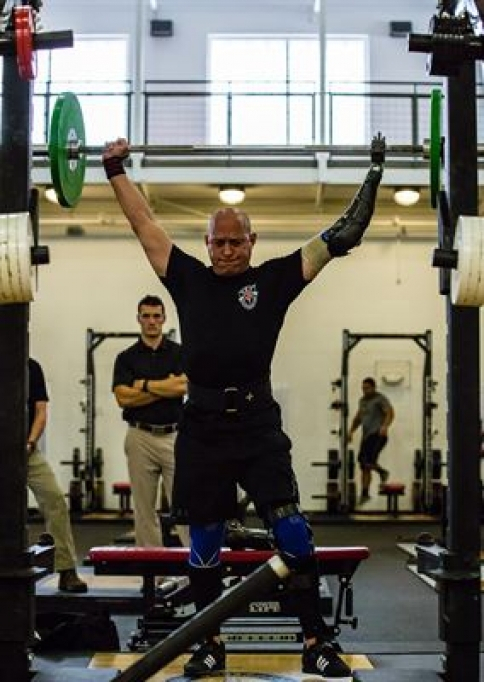 Army Sgt. 1st Class Ivan Morera conducts strength conditioning under the supervision of a Tactical Human Optimization, Rapid Rehabilitation and Reconditioning Program coach in the 7th Special Forces Group (Airborne)’s Combat Readiness Training Facility at Eglin Air Force Base, Fla., Feb. 10, 2016. In August 2013, Morera, a Special Forces medic, suffered severe damage to his left shoulder and knee, and had his left hand crushed when the vehicle he was driving rolled over while avoiding a suicide bomber in Afghanistan. Morera has since returned to full service. Army photo by Staff Sgt. Bryan Henso

EGLIN AIR FORCE BASE, Fla., May 5, 2016 — A Special Forces noncommissioned officer has returned to full active duty service two and a half years after his hand was amputated to free him from underneath a vehicle before a suicide bomber could strike a deadly blow against him and his team. Army Sgt. 1st Class Ivan Morera, a Miami native and a Special Forces medic, continues to serve with the 7th Special Forces Group (Airborne), despite being severely wounded in a vehicle rollover in Afghanistan.

In August 2013, an insurgent on a motorcycle drove up to the front-left tire of the mine-resistant, ambush protected all-terrain vehicle that Morera was driving. Aware of intelligence reports that insurgents were employing suicide bombers on motorcycles, Morera swerved to avoid the attacker. The insurgent pursued his vehicle, even as he swerved multiple times. The final time Morera swerved, the vehicle went off the road. When he overcorrected to return to the road, the vehicle began to roll over. While the vehicle flipped, the driver's-side door next to Morera broke off its hinges.

"I woke up and noticed my hand had been crushed. I called out for my team sergeant. He unstrapped himself and put a tourniquet on my arm," said Morera, recalling the aftermath of the rollover. "He called over my junior medic, who put an additional tourniquet on, and they had to complete the amputation in order to pull me out of the vehicle."
In addition to the loss of a hand, Morera suffered severe damage to his left shoulder and knee during the rollover. After he was medically evacuated, the motorcycle-borne suicide bomber returned to attack the Special Forces team, killing himself by detonating his improvised bomb and wounding a number of the Green Berets still at the scene of the accident.
The remaining medic immediately began to evaluate and treat wounds caused by the blast as other members of the team continued to prepare the damaged vehicle for the trip back to a coalition base.

Morera began his recuperation at the Center for the Intrepid at Brooke Army Medical Center in San Antonio. Only 15 days after his initial hospitalization, Morera reported for physical and occupational therapies. "My recovery at first was pretty easy, and I was excelling. But within three months, I started to get depressed when things got a little harder," Morera recalled. "In January 2014, I had reconstructive knee surgery and set new goals on getting out of the [Center for the Intrepid] and returning to 7th Group within five months. I was able to reach that goal and come home."

Because he is extremely competitive and fitness-oriented, the loss of a hand and severe wounds to his left shoulder and knee dealt a critical blow to Morera's identity as a husband, father and Special Forces operator. Physical performance is critical to a Special Forces soldier, and initially, Morera had no idea how he was going to regain his previous physical capabilities.
"It's because of my spiritual identity that I was able to stay strong, and because of my faith in God," he said. In physical therapy, he began the arduous task of strengthening his knee and shoulder to prepare them for reconstructive surgery. Efforts in occupational therapy focused on learning how to use his prosthetics. Especially challenging was learning how to contract specific muscles in his arm to control his prosthetic hand.

Morera returned to the 7th SFG's compound at Eglin Air Force Base in northwest Florida in June 2014. The day after his arrival, he reported to the group's force preservation directorate. The directorate's approach to the recovery of wounded Green Berets like Morera is both holistic in manner and comprehensive in aspects of mental, physical and spiritual recovery. The directorate's cadre, which includes a dietician, psychologists, performance coaches and a physical therapist, embraced Morera and worked to channel his drive to excel again.

Morera spends much of his time with members of the group's Tactical Human Optimization, Rapid Rehabilitation and Reconditioning Program, known as THOR3. Mike Sanders, the program’s director, coordinates much of Morera's physical conditioning. The mental identity of a soldier, and especially a Green Beret, is often tied to physical performance on the battlefield, in the gym and in everyday life, Sanders said he often tells visitors. The THOR3 program is an essential component to the recovery of a Special Forces soldier like Morera, Sanders said, because it helps restore something that often violently is taken away and leaves not only physical trauma, but mental trauma as well. "Being able to see my kids every day and being able to show them if you continue to push forward and have faith, you can get through anything," Morrera said. "I love my children deeply, and when they tell me I'm their hero, that motivates me to go further."

Morera passed a major milestone toward his goal in April 2015 when he conducted his first static-line parachute jump since being wounded. Since then, he's completed seven more jumps, for a total of eight with his prosthetic arm. His next intended breakthrough takes him above the clouds to be able to conduct military freefall operations. He and a team of experts are looking into the dynamics of conducting high altitude, low opening parachute jumps with prosthetics and what specialized gear might be necessary to make it possible. "Continue to move forward. Don't let your situation define who you are," Morera advises other members of the Special Forces community who have suffered such life-altering wounds. "Don't let your situation stop you from your goals. Everything and anything is possible with faith and determination."