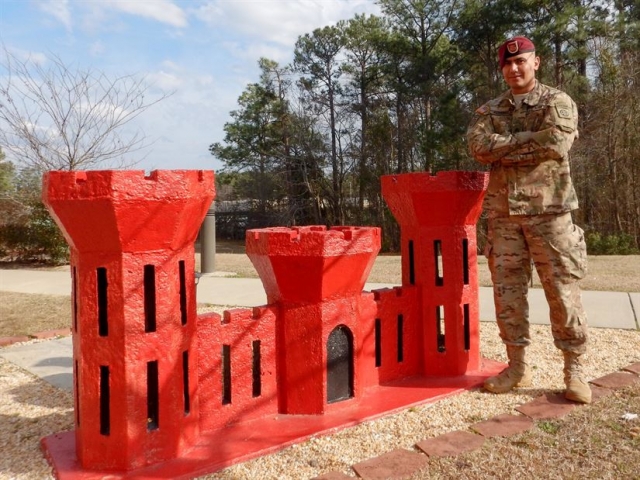 FORT BRAGG, N.C., June 13, 2017 — In Iraq's capital city of Baghdad during the 1980s, a family of six brothers and one sister — all very close in age — played in the streets and parks of their hometown, enjoying the simple things in life they had at the time. Through the decades, the times and the city had changed, and the streets and parks were not as simple.

Army Sgt. Ali Alsaeedy, an Iraq native and a paratrooper assigned to the 82nd Airborne Division's 307th Brigade Engineer Battalion, 3rd Brigade Combat Team, described his journey from being a young college student in Baghdad to becoming a paratrooper in America's Guard of Honor.

Alsaeedy, the son of an Iraqi army reserve officer, said Iraq was a joyous place to grow up. "We played basketball, walked to school — all the children in the neighborhood were close," he added. "There were negatives in politics, but we believed in our father, and everything was fine."

Alsaeedy's dream was to travel. "Everybody's goal [in high school] was to travel the world, places like [the United Kingdom], U.S., and Europe," Alsaeedy said. He kept that dream with him before pursuing a degree in biochemical engineering at the University of Baghdad.

"I was in my second year of college when everything happened — the troops arrived," he said. "It was a year later when it seemed things began to settle down. We all were trying to educate ourselves on the matter, because we believed — and still do — that the U.S. forces and allies were there to transform the country and help. We felt there was not going to be any more tyranny system or sects of families taking over the country, doing whatever they felt they wanted … so we believed in the change and welcomed it."

After graduating from college, Alsaeedy needed to find work, preferably in the engineering field. But it was extremely hard to come by, he said, due to the nature of the country and the fact that most employers hired only within their sects.

"I did not know exactly what to do or what I wanted to do, but I did know that I wanted to work for and with the service members," he said. "It was not just about money or security. It was about being a part of something important to me."

Unable to break into the U.S. contractor market, Alsaeedy's education and skill set eventually gravitated employers to him within the private sector. In 2005, he found stability in the information technology field as a networking specialist for satellite communications.

"Then one day a man came into the shop and it changed my life forever," he said. "He inquired about an internet network to be installed on a military base in Baghdad. I took the job. After the work was complete, they were very satisfied and needed more, so they hired me full-time. My English was very fluent, and I became a translator for them, too."

While the years passed, Alsaeedy's experiences and relationships grew through the ranks, and by 2007, he was a popular name among higher-ranking officials with the U.S. Air Force and the Marines in Qaim, Iraq.

"I saw in the soldiers what very few of us [natives] see," Alsaeedy said. "They were trustful, pleasant and respectful; they integrated me into their brotherhood."

Insurgency propaganda said the Americans were in Iraq to destroy everything, Alsaeedy said. "But they were not," he added. "They were building. They built infrastructure for the population and barracks for the Iraqi army. They supplied resources increasing our livelihood [and] creating jobs for husbands and fathers."

At the end of 2007, Alsaeedy received some big news. Then-President George W. Bush allowed vetted contractors who had worked for the U.S. government for at least five years to be granted special immigrant visas for them and their families. The visa allowed them to live and work in the United States. At the end of 2009, Alsaeedy said, things started to change as U.S. troops began to withdraw.

"The protection was decreasing and so was the structure," he said. "I knew if I stayed, my family and I were going to die soon." In 2010, Alsaeedy met his five-year requirement to qualify for the special visa for him and his family to move to the United States.

He settled in Norfolk, Virginia, where a new country and culture surrounded him. What he once knew as a world of war was now a life of peace and the pursuit of happiness, he said. He was immediately hired, and he worked for an oil and gas company from 2011 to 2012.

Alsaeedy said he felt grateful to the United States for the opportunities he'd received.

However, Alsaeedy said he “wanted to give them more.”

He enlisted into the U.S. Army in August 2013 as a combat engineer. Shortly thereafter, he attended basic training and advanced individual training at Fort Leonard Wood, Missouri.

Alsaeedy demonstrated his potential and quick-learning abilities, as well as  outstanding physical fitness. He was afforded the opportunity to attend airborne school at Fort Benning, Georgia, upon graduation.

"I found out that I was going to be assigned to the 82nd Airborne Division," he said. "I knew it was an honor and a prestigious unit. I remember seeing the 'Double-A' patch in Iraq. And to realize that I am now one of those paratroopers along with my family — I was beyond excited and humbled. However, it truly did not hit me until I came to Fort Bragg and walked through the division's museum. That's when I realized I was a part of something special."

In 2014, Alsaeedy arrived full of energy to Alpha Company, 307th BEB. He was a new Panther Engineer, and he integrated just fine among his leaders and peers.

"We did a lot of training," he said. "We went to every kind of weapons range you could think of. I learned demolitions, steel cutting, [went on] too many ruck marches, and was just very happy."

But Alsaeedy's heart was holding a deep secret: there was something missing.

"My real dream was to return to Iraq," he said. "I wanted to be an asset to the unit. I had the language, the background and culture. I knew if I ever went back, I would put myself out there to be as valuable as I could for the 307th."

In early 2015, the 3rd BCT deployed to Southwest Asia in support of Operation Inherent Resolve. At the time, it was the newest campaign in the fight against the Islamic State of Iraq and Syria. There, paratroopers assigned to the 82nd Airborne Division provided advice and assistance to Iraqi security forces.

In a twist of fate, Alsaeedy's unit operated in the neighborhood where he was raised. His dream finally came true.

"It wasn't easy at first," Alsaeedy said while looking up with teary eyes. "But it was my leadership. They understood my situation. They supported me. It made my job and task much easier."

Alsaeedy's background and capabilities soon became an asset for his battalion commander all the way up to division command sergeant major and higher-ranking officials in tactical operations centers around the area of operations.

With his hard work and commitment to his leadership and the unit's mission, Alsaeedy received the first battlefield promotion for a noncommissioned officer during the OIR campaign. He was pinned with the rank of sergeant during the fall of 2015 upon the unit's redeployment to Fort Bragg.

His accomplishments and accolades did not stop there. "When I became an NCO, great things began to happen for me and my family," Alsaeedy said. He attended the Warrior Leader's Course soon after becoming a sergeant, learning technical skills and correspondence in the craft of an NCO.

Alsaeedy's motivation and physical fitness separated him from his peers. He wanted to go to Sapper School and master his craft as an engineer. "I may have had a more advanced role during deployment, but I am still an engineer in the 307th," he said.

Early 2016 came around, and he began training with the division's Best Sapper Team as it prepared to compete in the U.S. Army Best Sapper competition.

He never went to Sapper School, though. Immediately upon graduating the Pre-Ranger Course, he was put on a bus to Ranger School. Alsaeedy went straight through the 62-day course, a course that normally has a high attrition rate.

"I have been busy, that's for sure," he said. "But I felt the more I accomplish as an NCO and a paratrooper, the more I am giving back to the Army."

"I am just so grateful. I cannot put into words how I feel, landing the opportunity during the mid-2000s to becoming a citizen, a soldier deployed to my hometown and a Ranger," he continued. "My wife and child love the installation, the people, and my daughter is receiving a great education from the schools on Fort Bragg. The Army adopted me, and I am forever in debt to the most professional and perfect organization: the 82nd Airborne [Division]."