FORT CARSON, Colo., June 19, 2017 — When Daniel and Angel Durkee first met, they were in high school chemistry class in Canyon Lake, California, and the reaction was immediate. They started dating, but their bond would be tested as Daniel, a year older, graduated, joined the Army, and was stationed at Fort Bragg, North Carolina. 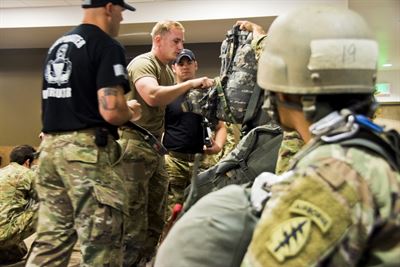 Army Sgt. Daniel Durkee, center, a mechanic assigned to the 10th Special Forces Group, performs a jumpmaster personnel inspection, May 19, 2017, as his wife, Sgt. Angel Durkee, foreground, watches during a static-line jumpmaster course at Fort Carson, Colo. Army photo by Staff Sgt. William ReinierAngel graduated the next year and also joined the Army. The two were reunited at Fort Bragg and married in 2016.

Last month, the two were among fifty-three soldiers assigned to various Special Operations units across Fort Carson to graduate from a static-line jumpmaster course hosted by 3rd Battalion, 10th SFG.

For the Durkees, the course provided something more than just the chance to earn the title, "jumpmaster."

Although they work in the same unit, they rarely interact during the day. But, being in the same jumpmaster course was a unique treat for them.

"It’s probably been some of the best couple of weeks I’ve had in the Army, because I get to see him every day," Angel said.

Daniel said that pulling jumpmaster duty together was something he and Angel had talked about during the course. On the morning of the final practical work in the aircraft exam, they found out they’d be doing it sooner than they thought.

For their final exam, students were required to execute jumpmaster actions inside an aircraft while flying 2,000 ft. above Barbara Drop Zone at Fort Carson. While inside of a C-130 Hercules aircraft, Jumpmaster teams give commands simultaneously to all of the jumpers so everyone is ready.

During PWAC, the Durkees found out they would be evaluated together as one of those jumpmaster teams.

"It definitely settled my nerves," Daniel said. "It was nice to be able to look across and see a familiar face. It gave me a lot more confidence." 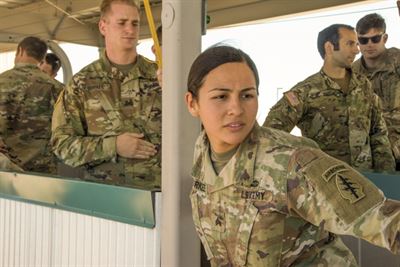 Army Sgt. Angel Durkee, an intelligence analyst assigned to the 10th Special Forces Group, practices leaning outside of a simulated aircraft door, May 19, 2017, during a static-line jumpmaster course at Fort Carson, Colo. Army photo by Staff Sgt. William ReinierTogether, Angel and Daniel called commands to their jumpers, inspected the paratroop door of the C-130, and leaned out of the aircraft to look for any potential dangers in the air or on the ground. Once over the drop zone, they issued their final jump command.

Within seconds of each other, both soldiers became jumpmasters.

"It was cool," Daniel said. "Once we both found out we were in the class it was our goal to both pass."

The Durkees’ new goal is performing duties together as a jumpmaster team.

Daniel said they’ve talked about it a lot since they found out they were both graduating.

"It would just be nice to get to do that with him," Angel added.

One of the course graduates, Army Lt. Col. John Gianelloni, commander of 3rd Battalion, 10th SFG, said that what makes this course different from those offered at Fort Benning, Georgia, or Fort Bragg, North Carolina, is the emphasis placed on the special requirements.

Gianelloni said that having 10th SFG support personnel with the ability to perform duties is key.

"It won’t always be the operators who are expected to perform duties as a jumpmaster," he said. “That’s why we need to have competent, experienced jumpmasters across the entire unit."

As support personnel, the Durkees understand what it takes to help make the unit run. Now, they are both ready and able to serve as a jumpmaster team.