Meet Your Military: A-10 Pilot Spits Fire in Fight Against ISIS 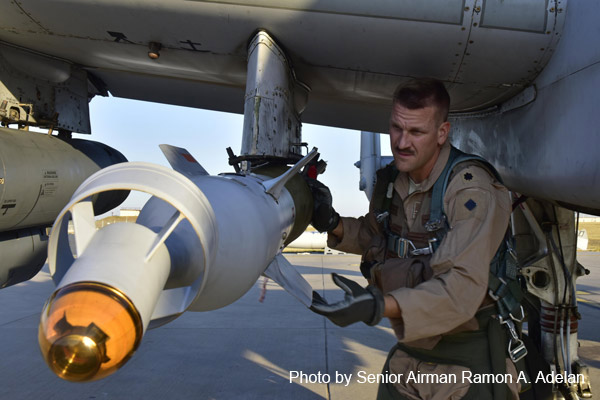 Air Force Lt. Col. Ben Rudolphi, the commander of the 407th Expeditionary Operation Support Squadron, conducts a preflight munitions check on his A-10 Thunderbolt II at Incirlik Air Base, Turkey, July 11, 2017. Rudolphi has played a dual role in Operation Inherent Resolve, serving as a squadron commander and flying A-10s in the fight against the Islamic State of Iraq and Syria with the 477th Air Expeditionary Group.

INCIRLIK AIR BASE, Turkey, July 28, 2017 — The darkness of a desert night surrounds his aircraft. The wind rushes past his cockpit. As the target approaches, nervousness builds deep within his core and his heart races at extraordinary speeds.

Locking in on the tasks at hand, the pilot's eyes glow as he focuses through night vision goggles to locate targets below. Muscle memory from years of training takes over with subconscious adjustments on the controls.

Then with the target in his sights, he deploys the carefully selected weapon system onto an enemy position.

This is how Lt. Col. Ben Rudolphi, the 407th Expeditionary Operations Support Squadron commander, describes flying combat missions in the A-10 Thunderbolt II.

"You're constantly locating the target, checking, rechecking and adjusting for your pass," Rudolphi said. "The Joint Terminal Attack Controller is communicating with me; I'm responding back and relaying information to my wingman."

"My heart is beating out of my chest at this point as I'm waiting for the JTAC to say, ‘cleared hot,'" he continued. "Once I hear those words my nerves go away. I roll in, make my pass and then we are on to the next target." 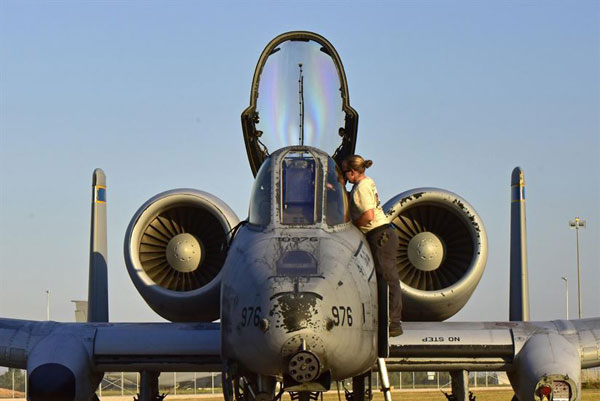 A maintainer from the 447th Expeditionary Aircraft Maintenance Squadron prepares Air Force Lt. Col. Ben Rudolphi, the 407th Expeditionary Operation Support Squadron commander, for flight in an A-10 Thunderbolt II at Incirlik Air Base, Turkey, July 11, 2017. Photo by Senior Airman Ramon A. AdelanEven as an experienced A-10 pilot, Rudolphi still feels his nerves standing on edge each time he goes out on a mission.

"My mind is going a hundred miles per hour before I make my first pass on a mission," Rudolphi said. "All I'm thinking about is ‘Don't mess this up!' At the same time, I‘m pushing buttons, twisting knobs, speeding up or slowing down, and continually checking where my target is without even thinking about it. All I know is that I need to make a direct hit to help our troops on the ground."

Originally tasked to deploy as an A-10 pilot in support of Operation Inherent Resolve, Rudolphi saw his mission change before even leaving the U.S.

Instead of manning his aircraft, he was given the opportunity to lead others as the commander of the 407th EOSS and accepted the position.

"I immediately took this opportunity," Rudolphi said. "This is a new experience and an achievement, which many people don't get the opportunity [to have]. I have always been behind the yoke controlling the airspace. But now I'm at the forefront ensuring operations can continue."

At the 407th Air Expeditionary Group, Rudolphi leads his unit in the essential buildup of a strategic operating location for U.S. Air Force, joint and coalition forces operations. As the 407th EOSS commander, he plans and evaluates the installation for expansion, future and short notice operations, while enabling the mission to continue around the clock.

Meaning such things like airfield operations, dining facilities and other supporting functions are prepared for these types of circumstances.

Though his focus lies with the mission and airmen under his command, the assignment has not kept Rudolphi from the battlefield. When given the opportunity, he quickly transitions to take the familiar aircraft controls and has flown A-10 combat missions with the 447th AEG in the fight against ISIS in Syria and Iraq.

"The A-10 is an inimitable platform, bringing an unmatched ability to the fight," Rudolphi said. "With its low airspeed, it can quickly change directions and deliver precise firepower."

The A-10 supports ground forces with rapid employment close air and contact support. It utilizes a variety of bomb, missiles and a 30 mm GAU-8 seven-barrel Gatling gun.

"When you think about jets you think of these roaring fast planes," Rudolphi said. "Well the A-10 isn't that; it's what we call a walker. The best way to explain how it's a walker in relation to other jets is to image going by a baseball game. If you were to walk by, you can see the entire play happening. If you were driving by you can kind of see the action, but you're going too fast to see what is really happening."

Rudolphi continued the metaphor by saying to imagine your voice is your weapon. Driving by you can cheer, but it'll be a jumbled noise. But a walker can slow down, redirect toward the action and cheer. This time you would be heard and understood.

"In a sense, you can say I quickly redirected my path to be the 407th EOSS commander," Rudolphi said. "Now, I'm in close contact with the entire spectrum of operations, which [allows] the mission to continue."