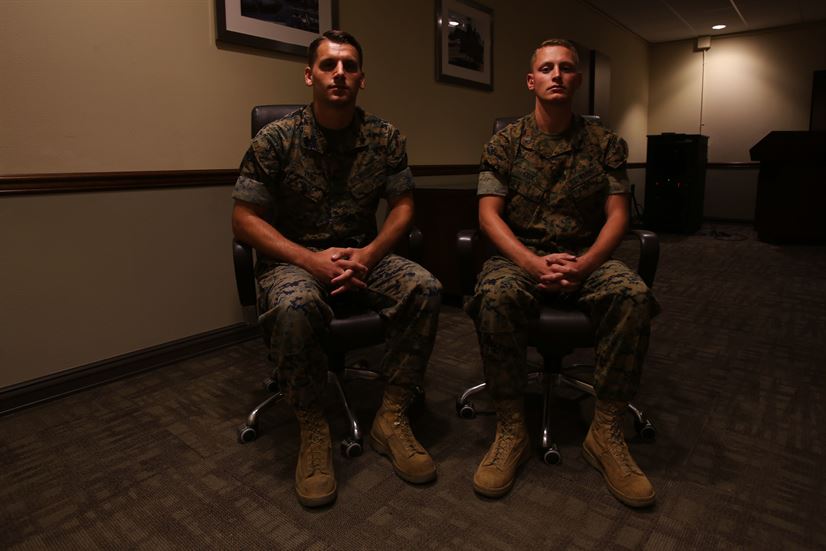 "Myself and Sergeant Vura headed to the concession area of the festival, which is toward the back of the concert area," Cox said. "We heard the initial shots and didn't know if it was the speakers making noise or actual gunfire. ... Then the shots went off again, and we knew there was a threat."

After identifying which side of the stage was targeted, both Marines ran toward the gunfire and started assisting in the evacuation of the crowd.

"People were trying to get out of the area but were trapped in by crowd-control barricades," Vura recalled. "We positioned ourselves in between the stage and the barricades and started assisting people in climbing the barricade and running for cover."

In the process of assisting victims trying to find cover, the Marines came across several people who had been shot. They evacuated the injured victims while applying pressure and using makeshift tourniquets when needed.

"We came across a man that was hit in the chest," Vura said. "We moved some stuff out from under the stage and told his significant other to maintain pressure on the wound until rescue personnel could assist."

"As we turned to walk away, we found a girl that had a gunshot wound to her neck," Cox said. "We immediately pulled her over the barricade and started applying pressure to her neck. There was more blood coming from another wound, and we found that she had been hit in the back as well."

At this point, Vura and Cox separated. Cox stayed with the wounded woman and assisted in getting her to the hospital.

"I remember the last thing she did when we got to the hospital was give me a thumbs up," recalled Cox. "I knew she was going to fight and that I could leave her in the hands of the doctors."

Vura continued helping victims escape and treated more wounded until the rescue teams arrived on scene. "I started making my way around the barricades, and myself and another individual made some makeshift stretchers to carry the wounded to safety," he said. "During that process, we carried around five to six wounded individuals, as well as several deceased bodies, out. At that point, SWAT arrived and secured the area. ... I just walked to the strip, sat down and tried to process everything that just happened."

Many would say these Marines went above and beyond the call of duty and demonstrated characteristics that are instilled in every Marine during training and life in the Marine Corps. However, they have no desire to be recognized for their actions.

"I went to this country concert to get away from all of my life's problems, and it became the realest moment of my life," Vura said. "Remember the basics and know that something like this could happen at any moment."

"With Sergeant Vura there, I had more courage than I would have had on my own," Cox said. "We were there when the people affected needed us. ... We are Marines 24/7."