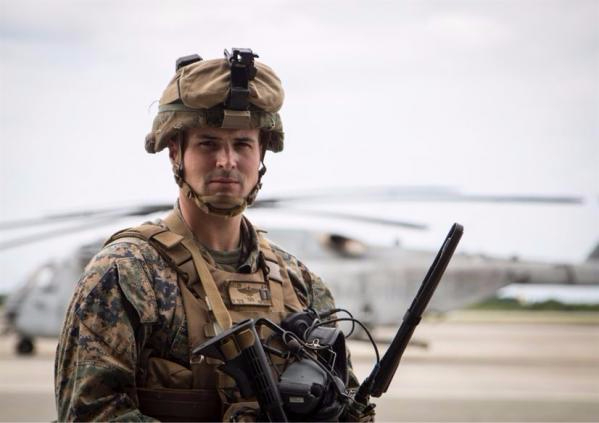 OKINAWA, Japan, Nov. 17, 2017 — Marine Corps pilots are the only aviators in the U.S. military who are taught the basics of infantry tactics prior to flight school.
This ensures every Marine is a rifleman. Though the chances of an aviator leading a platoon of infantry Marines are slim to none, there are cases where Marine pilots are embedded in infantry units.

“As a CH-53 pilot, I always have the opportunity to transport grunts in the back of my aircraft, so this is just one more way where I can work closely with them and support them,” Miller said.

FACs are tasked out from the aviation field to directly support ground combat units. As the FAC, Miller is in charge of directing close air support and other offensive air operations. The FACs typically are senior aviators who have spent at least two years in a fleet squadron, according to Miller.

“He speaks from the air side of the house and he knows what the pilots are saying and what they are looking for from us infantry guys, so he's able to bridge that gap between the two communities,” Marine Corps 1st Lt. Harry Walker, the fire support team leader, said of Miller and other FACs.

Working With the Infantry

A Marine provides security while participating a simulated night raid during an air assault training event at Marine Corps Air Station Futenma, Okinawa, Japan, Oct. 31, 2017.
Photo by Cpl. Carl King
Once the pilots touch base with the infantry units, they are indoctrinated into a completely different culture for almost two years.

“Coming from the air wing and going head-first into an infantry battalion, it’s a little bit of a culture shock just because you do have all those hikes and spend a lot time in the field,” Miller said. “After I graduated from [The Basic School], I don’t think I spent one night in the field and then the first night I was out with the battalion I slept under the stars. But it’s still good to be here.”

“For them it’s all about the mission,” said Miller. “So as an aviator, it pushes me to be more studious and when I get back to the cockpit, I’ll be a better aviator.”

The Lava Dogs are currently forward deployed for six months to Okinawa, Japan. The battalion is tasked to provide a forward-deployed combat-ready unit for in support of theater requirements.