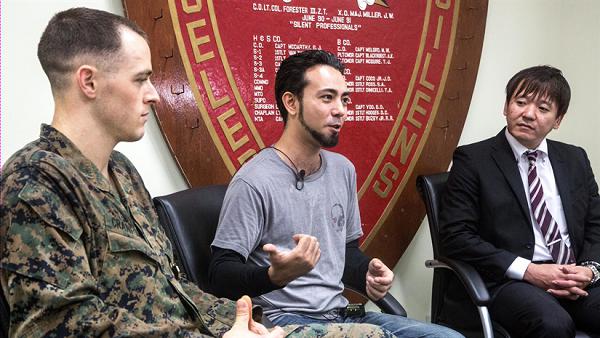 Marine awarded for saving local Okinawans from riptide.
Marine Corps 1st Lt. Aaron Cranford, left, speaks in an interview with Justin Kinjo and Yusuke Teruya, divers who almost lost their lives at the hands of a rip current, after the he receives the Navy and Marine Corps Medal at the 3rd Reconnaissance Battalion Headquarters building on Camp Schwab, Okinawa, Japan, Jan. 8, 2018. Cranford was awarded the Navy and Marine Corps Medal for risking his life while rescuing three divers and a local Okinawan who were caught in rip current during a recreational dive at Onna Point, Okinawa, Japan, in April 2017.
Marine Corps photo by Lance Cpl. Josue Marquez

Marine Corps 1st Lt. Aaron Cranford, a supply officer with Headquarters and Service Company, 3rd Reconnaissance Battalion, 3rd Marine Division, was awarded the Navy and Marine Corps Medal for saving four divers, including a local Okinawan, who were caught in a rip current during a recreational dive at Onna Point, Okinawa, Japan, on April 23, 2017.

Cranford surfaced from a 35-minute dive and noticed three distressed divers caught in a surf zone about to be swept out to sea by a rip current.

After he ensured his dive group had reached a safe point to exit the water, Cranford returned to the surf zone at risk to his own life to begin rescuing the divers one by one.

“I could definitely tell that the divers were in distress,” said Cranford, a native of Fort Worth, Texas. “Their gear was not the way it should have been and they were waving their arms back and forth trying to get people’s attention.”

One local Okinawan said he believes he wouldn’t be alive today without Cranford’s help.

‘I Knew I Was Going to Die’

“I just knew I was going to die," said Okinawa City native, Justin Kinjo. “My leg was stuck. I couldn’t get any air, and as soon as I reached the surface the waves pushed me back in -- knocking my [air] regulator out of my mouth.”

For his courageous actions, Commandant of the Marine Corps Gen. Robert B. Neller awarded Cranford the highest non-combat decoration for heroism.