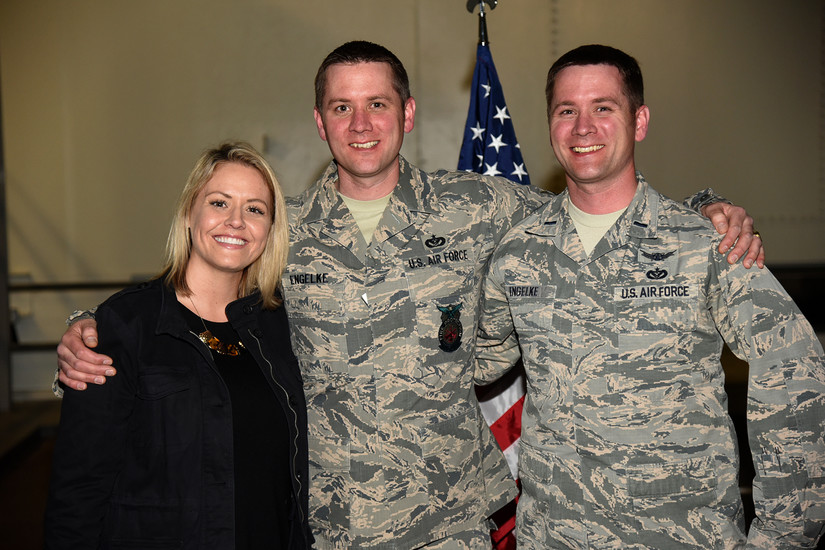 Cody flew in to be the presiding officer at Chris’ reenlistment March 8.

“I’d gone back and forth about reenlisting at my last assignment in Ramstein, Germany,” Chris said. “I finally figured it was best to just do it where I have the best job in the Air Force here at CMAFS.”

Chris was coming up for his date of separation on March 23. In order to get to 20 years of service he needed to be within 30 days of his date of separation to do a six year reenlistment. If he had done his reenlistment a month earlier it would have timed him out at 19 years active duty and he would have to reenlist again to reach 20-plus years of service.

“I knew if I did a six-year reenlistment it would get me to 20 years,” Chris said. “After that I could serve even longer if I wanted to.”

Cody took a break from the Air Force to attend the University of Washington but that didn’t last long.

“College didn’t work out financially for me,” Cody said. “I saw how the Air Force was working for Chris and he absolutely loved it. He convinced me to come back to the Air Force in civil engineering and pursue my degree using my GI Bill.”

In March 2015, Cody commissioned as a second lieutenant.

Though there are no promises that the Air Force will station them at the same base, the twins hope to be working together soon. Chris said there is a tentative assignment for his brother to rejoin him at CMAFS in the near future.

“Both of us belong to the 21st Space Wing,” Cody said. “The 18th SPCS is one of the geographically separated units for the wing. I’m really hoping to get assigned to CMAFS with my brother.”

The twins enjoy serving in the Air Force, they said.

“Reenlistment is always a special moment in an airman’s career, but to have your twin brother deliver the oath of enlistment for you is truly special,” Moore said. “It will be a moment that both Chris and Cody will remember for the rest of their careers.”