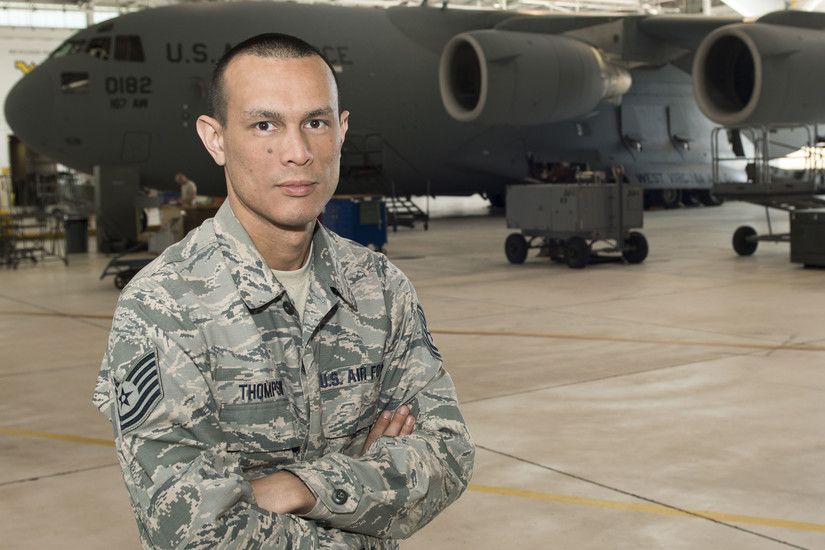 Many found their way to the United States.

Air Force Tech. Sgt. Michael Thompson’s mother was one of those refugees.

Thompson, an electronic integrated systems mechanic for the 167th Airlift Wing’s communications, countermeasures and navigation systems section here, said his mother’s journey to the United States started with one member of the Air Force who sponsored her, her two sisters, and their mother.

It was that one airman who inspired Thompson to join the military as a member of the West Virginia Air National Guard.

“There is a whole family tree over here that wouldn’t exist if he hadn’t done what he did,” Thompson said. “I’ve never forgotten the difference one member of the military made on our family and I always hoped that if I joined I would make a difference in someone else’s life.”

In April 1975, two years after the U.S. had pulled combat troops out of Vietnam, it became clear that the communist party would take over South Vietnam. Americans, as well as Vietnamese who were deemed at-risk if they remained in the country, were evacuated en masse.

Thompson said his mother, not quite a teenager then, recalls the evacuation.

“She remembers them frantically loading people onto a C-130 and then high-tailing it out of there as fast as they could. They [and] the plane, were being actively attacked from the ground when they were leaving,” he said.

Without the sponsorship of that one member of the military, a man who befriended his grandmother in Vietnam, it’s unlikely his family would have made it out of the country and to the small town of Shepherdstown, West Virginia, where they settled after leaving their home.

Thompson said his grandmother went to work in a factory to provide for her daughters and eventually bought a house.

“She made sure that her kids got the opportunity to learn the language, get an education and go to college,” he said. “My mom and her sisters all went on to raise their own families and live comfortable lives. They have so much more here than they ever would’ve had if they stayed in Vietnam.”

Thompson said he had always hoped to join the military, but his mother, because of her experiences in Vietnam, tried to dissuade him.

Instead, she pushed him to focus on his studies and to perform well in school.

When Thompson graduated from high school in 2003, he chose to study engineering.

“In high school, I thought about all of the jobs that really make a difference and as I narrowed down the list it became engineering or the military. I saw both as having end results that make a difference,” Thompson said.

Thomas attended engineering school in Flint, Michigan, and then moved to Chicago during his last two years of college for an internship at a large wealth management firm.

After completing college and the internship, he said he felt unfulfilled and the call to serve his country had not quieted.

Thompson left Chicago, returned home, and told his mother he was joining the military.

His mother’s views on the military had softened by this time. She had taken a job at a bank, which was located on the 167th Airlift Wing’s installation at the time, and got to know many of the members of the wing.

Thompson said a former first sergeant for the 167th Logistics Readiness Squadron and family friend helped him transition into the wing.

“Chip Palmer told me I should go into avionics. He told me what I should do and I trusted him. He was right,” Thompson said.

After nearly ten years in the career field, he said he still enjoys his job.

“We get the ball rolling here so that stuff can happen out there,” Thompson said, in explaining how his job here at the wing ensures deployed airmen and soldiers get the supplies and equipment they need.

“I know that someone out there is making a difference because I’m doing my job here,” Thompson said. “And I can see that clear line between me and them.”