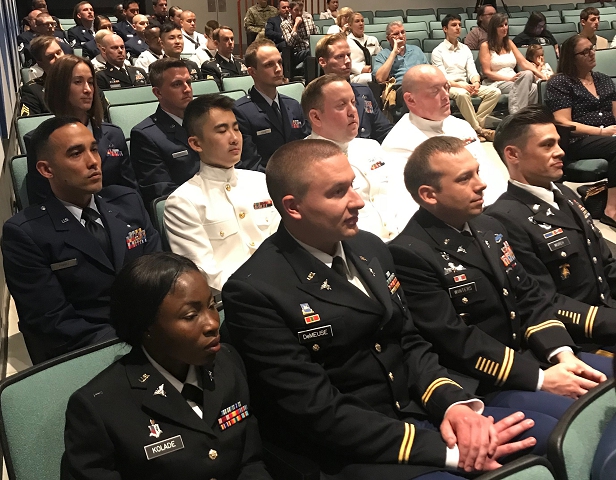 Former contemporary Christian singer-songwriter and Navy linguist Paden Smith sits in the center row as one of 15 graduates of the Uniformed Services University's Enlisted to Medical Degree Preparatory Program at George Mason University in Fairfax, Va., May 16, 2018. Photo by Staff Sgt. Joseph Pagan

BETHESDA, Md. -- By Sarah E. Marshall
Former contemporary Christian singer-songwriter Paden Smith once sought to heal others with his music and lyrics.
Smith, who has served as a Navy linguist, graduated from a two-year medical degree preparatory program May 16 and will begin studies this summer at the F. Edward Hebert School of Medicine at the Uniformed Services University of the Health Sciences here.

He said he grew up listening to both genres and always considered contemporary Christian music to be a blend of the two, with gospel's uplifting messages and country's storytelling. His music career started in high school when he began writing his own songs.

“Christian music just felt natural to my taste in music and my upbringing,” he said. “Plus, I knew that I wanted my music to be a tool for good, and I felt that Christian music was a great way to make a positive and lasting impact on listeners.”

In college, he started working with friends on an album and eventually decided to make the leap to recording his own music. He collaborated with friends to co-write many of the tracks on his debut Christian/gospel album. Drawing on his own experiences, he said, he tailored the lyrics in hopes that others would find this music to be as uplifting and therapeutic as it had been for him.

Following the album’s successful release, he went on to film a military tribute music video inspired by the military town he calls home: Cheyenne, Wyoming.

Smith grew up surrounded by patriotic culture and looked up to several family members who served in the armed forces. While producing the tribute video, he worked closely with service members and surviving family members. He was so impressed by their level of sacrifice, he said, that this sparked his own interest in serving his country. Soon after, he enlisted in the Navy.

Smith spent his first eight years on active duty serving as a Chinese linguist, but he had dreams of becoming a doctor. In 2015, he learned about a physician pathway program for service members, USU’s Enlisted to Medical Degree Preparatory Program, or EMDP2. The 24-month program is a partnership with the U.S. armed forces and George Mason University’s Prince William campus that allows highly qualified enlisted service members to remain on active duty while completing pre-med coursework that makes them competitive for application to medical school.

Students are required to apply for medical school at the Uniformed Services University of the Health Sciences, but they may also apply to other accredited U.S. medical schools through the Armed Forces Health Professions Scholarship Program. Nearly 70 students -- including military combat medics and corpsmen, musicians, intelligence analysts, infantry soldiers and others -- have been accepted into the EMDP2 program since its inception.

Smith graduated from the EMDP2 program along with 14 other enlisted members from the Army, Navy, Air Force and Marine Corps. He sang the national anthem in an auditorium filled with thousands of students, faculty, staff and family members at GMU’s graduation ceremony.

Immediately following the ceremony, Smith and his classmates were commissioned as ensigns or second lieutenants in their respective service branches.

“Whether through music or medicine, I have always wanted to help heal others, and I feel that this next chapter in my life will allow me to achieve that goal,” Smith said. “EMDP2 has given me the incredible opportunity to transition from my career as a Navy linguist to a career in the Navy Medical Corps, for which I will always be grateful. I am looking forward to the academic, personal and military experiences unique to Uniformed Services University.”