Meet Your Military: ‘Sky Soldier’ Jumps Off Cliff to Save Drowning Man 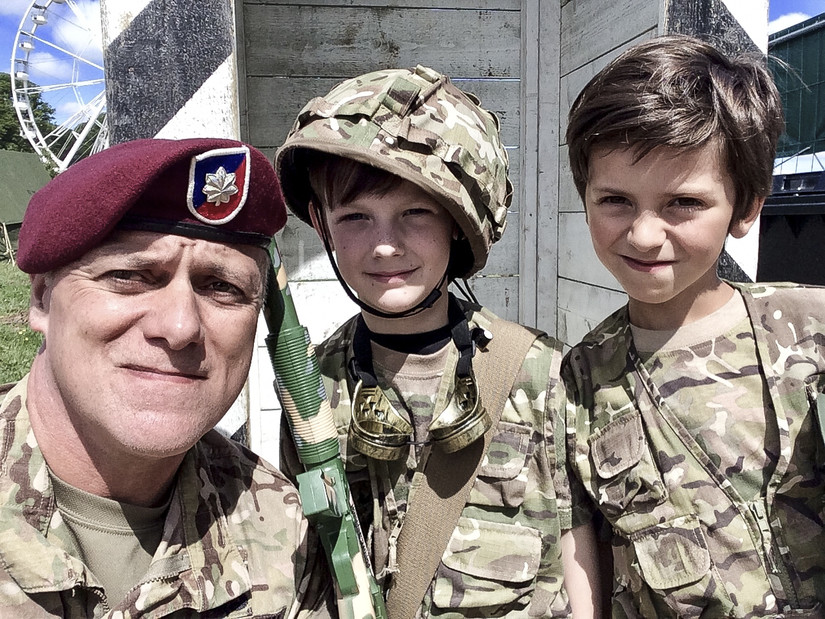 Army Lt. Col. John Hall, a public affairs officer with the 173rd Airborne Brigade Combat Team in Vicenza, Italy, takes a selfie with French boys dressed as soldiers in Sainte-Mere-Eglise, France, June 2, 2018. Hall was participating in the D-Day commemoration and the boys were playing as guards at a campground near the American forces. Photo by Lt. Col. John Hall

VICENZA, Italy --
It was a beautiful June day in Contra Pria, Italy. Families enjoyed a picnic together, and the refreshing water served as a welcome refuge from the heat and humidity of the last weekend leading into summer.

It was Father’s Day in America, and Army Lt. Col. John Hall, a public affairs officer with the 173rd Airborne Brigade Combat Team here, decided to take advantage of the weather to bring his grandsons to a popular nearby swimming hole.

The tiny hamlet of Contra Pria is made up of a few houses that appear lost in the foothills of the Dolomite Mountains. The half-dozen houses follow the course of the Astico, a small river created by the melting snow of the mountains that flow down into the rocky valley creating deep chasms with frigid still waters that invite adventure seekers escaping the summer heat.

When Hall and his family arrived early on June 17, they were surprisingly greeted by Army Lt. Col. Jim Keirsey, the commander of 2nd Battalion, 503rd Infantry Regiment, and his family, who were picnicking and swimming with some friends in the remote swimming area. They introduced their children to each other who then played in the beach areas together.

“We noticed a few people jumping from the 20-30 foot cliffs that formed a small canyon along the stream,” said Hall’s wife, Laura Hall. “Jumpers would often pause for scuba divers in wet suits exploring the glacial waters that feed into the chasm below.”

This peaceful scene completely changed in the blink of an eye. 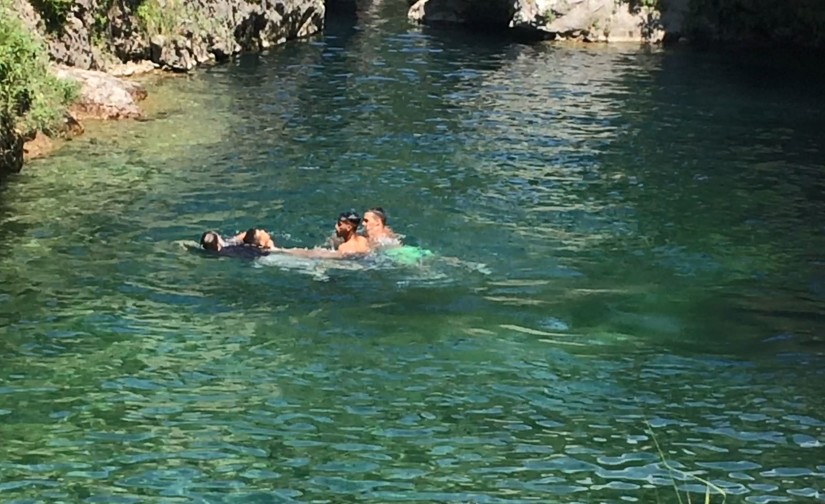 Army Lt. Col. John Hall, a public affairs officer for the 173rd Airborne Brigade Combat Team, saves a man from drowning in the frigid waters of Pria Park, a swimming hole in the Dolomite Mountains of northern Italy, June 17, 2018. The man was challenged to jump from the cliff that surrounds the deep swimming area formed by the melting snows from the surrounding mountains. Photo by Spc. Josselyn Fuentes

“The boys were taking a break from the cold water when I decided I would climb up on the cliff to see what the divers were exploring,” Hall said. “Just as they swam away, four Italian men, probably somewhere in their twenties, appeared above the river on the opposite cliff. They seemed to be daring each other to jump. Two immediately jumped and then challenged their friends. One chose not to jump at all, while the other hesitated, but after a few minutes I saw him falling through the air.”

Hall said that when the man hit the deep, frigid water, he began to thrash about, yelling for his friends to help as he repeatedly went under water. The two men who jumped in earlier leapt from the cliff to attempt a rescue, but as they swam up to him, the scene turned into what appeared to be a fight or wrestling match in the water.

Hall could see from his vantage point on the opposite cliff that the struggling man was drowning, and would possibly drown his companions, as they all began to go under water together.

“I jumped from the cliff,” Hall said.

“I swam over to the three men, firmly wrapped my arm around the chin of the drowning man and pulled him onto my hip. The other men briefly continued pulling at us and one another. Once we broke free, I swam the man to the cliff, pulled him around, and placed his hands on the rocks.”

One of the man’s friends swam over to help Hall hold him in place while he caught his breath. The men swam toward the water’s edge, but the group was still in deep water without a foothold. Exhausted and in shock, the man was unable to work his way along the rocky face to reach the shallow waters. As they both clung to the rock face, Hall indicated to him that he would help him climb and push him up to safety.

“Once he was safe, I swam over to a rocky outcropping and climbed to verify that he was ok,” Hall said. “Still shaking from the experience, the man turned and gave me a hug.”

"John Hall will claim he was just in the right place at the right time to save that guy's life, and that may be partially true,” Keirsey said. “But it really takes the right person to recognize somebody is in jeopardy and then have the courage to do something about it.”

“At first, I thought he was just jumping to amuse our grandsons who were watching. When I saw him swim into a group of splashing men and pull one out, it was then that I realized that he was saving the man,” Laura said.

“I was surprised that someone who couldn’t swim well would jump into those waters, but I wasn’t surprised that John helped him,” she said. “That’s just John.”

“I am just so glad that someone was there to help him. After it was over, I couldn’t help thinking it was Father’s Day,” Hall said. “No man should lose his son on Father’s Day.”