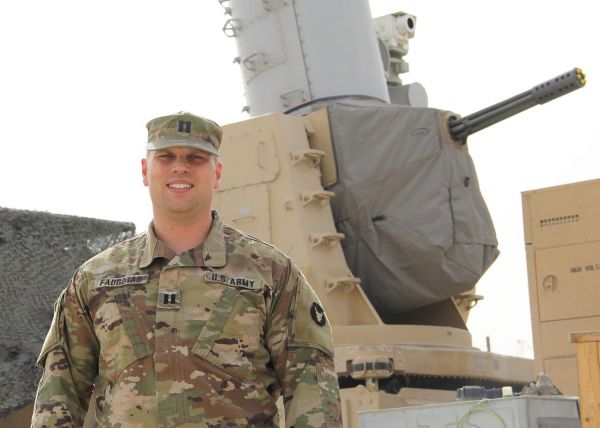 UNDISCLOSED LOCATION – Pursuing a doctorate usually requires countless hours dedicated to research, exams, colloquium and dissertations. Accomplishing this even in the most ideal setting can be a challenge. Imagine making the process more complex by adding an additional layer to the pursuit: Earning a doctorate while deployed to the Middle East.

Military, family and the pursuit of knowledge were some of the influences Faugstad cited in his hunt for an advanced degree. He said his goal in obtaining a doctorate was in alignment with military principles of chasing excellence. He also said he hopes his children will see that learning, whether institutional or self-improvement, is a never-ending journey.

Chasing excellence requires a lot of hard work and determination. Fortunately, Faugstad had the prerequisites needed, according to those who served with him.

"He has an incredible work ethic as evidenced through his dedication to the Iowa Army National Guard and commitment to civilian career aspirations," said Maj. Arthur Mason, executive officer of the 1-194th FA. "During this mobilization, he has been called upon to fill many roles within the battalion. He has always accepted the challenge and worked to make the organization better at all levels."

Pursuing a degree while deployed had some unexpected advantages, according to Faugstad.

"One of the best things about the deployment is that it took many daily life obligations off of the table," he said. "This freed up mental energy and time to increase focus on writing my dissertation. Admittedly, I relished having something to focus on that was so engaging."

While chasing his doctorate provided a distraction to the daily grind of a year-long deployment, it was not without its obstacles. Time management is very important no matter what the situation – more so when there is an eight- or nine-hour time difference involved. That made it all the more challenging for Faugstad to schedule appointments with advisers or defend his thesis in front of a committee.

"Prioritization of what matters most helps to create focus," he said. "That focus, in any walk of life, is key to success. To balance everything, I found it critical to look holistically at life and what matters."

"Ignore your workouts, and health decreases," Faugstad explained. "Ignore sleep, and mental health and daily performance decreases. Spend too little time on homework, and watch your grades suffer. Ignore the family too much, and you are missing out on the most important part of your life."

Faugstad indeed found balance not only by receiving his degree but also by accomplishing his day-to-day tasks with the battalion. He served as both the battalion assistant operations officer and the acting battery executive officer for the counter–rocket, artillery and mortar (C-RAM) mission within the CENTCOM area of operations.

"It's an incredible feat," said Mason. "The mission that the battalion has been given is very non-standard. We've had to learn new skills and adapt to a high rate of change. Capt. Faugstad has been able to accomplish that challenge, all while earning a highly advanced degree. This is nothing short of incredible."

Remembering the light at the end of the tunnel kept Faugstad focused on what mattered most to him.

"Assuming that you are getting an education to improve your life, losing things like health and relationships during it nullifies the purpose," Faugstad said.

Before deciding to pursue a doctoral degree, Faugstad weighed the sacrifices he would have to make.

Faugstad believes the right choice will not always be the same for each person, but there are many ways to continue education.

"Lifelong learning is a pursuit that should largely be achieved outside of school and is a better indication of success," Faugstad said.

Despite Faugstad's experience in formal education, he urges fellow Soldiers to look at ways they can learn, grow and excel in their careers.

"Degrees can help you learn in a structured approach and speak the language of those already in the career path you are choosing to go," he said. "However, reading, networking, certifications, and other choices can be of equal or greater value."

Outside of school and military duties, Faugstad has been running a consulting firm since 2014. He hopes to incorporate what he has learned during his doctoral research to help others.

"Another large part of my motivation is to give away a lot of what I learned to health care organizations to learn and improve the quality of health care around the world," he said.

Now that he has completed his degree, Faugstad will be able to spend more time with his family after the deployment. His family includes his wife, Laurianne, and sons Beowulf, 10, and Thor, 8.

"Ice fishing, bike riding, video games, art and many little family adventures are how we keep the balance," Faugstad said.