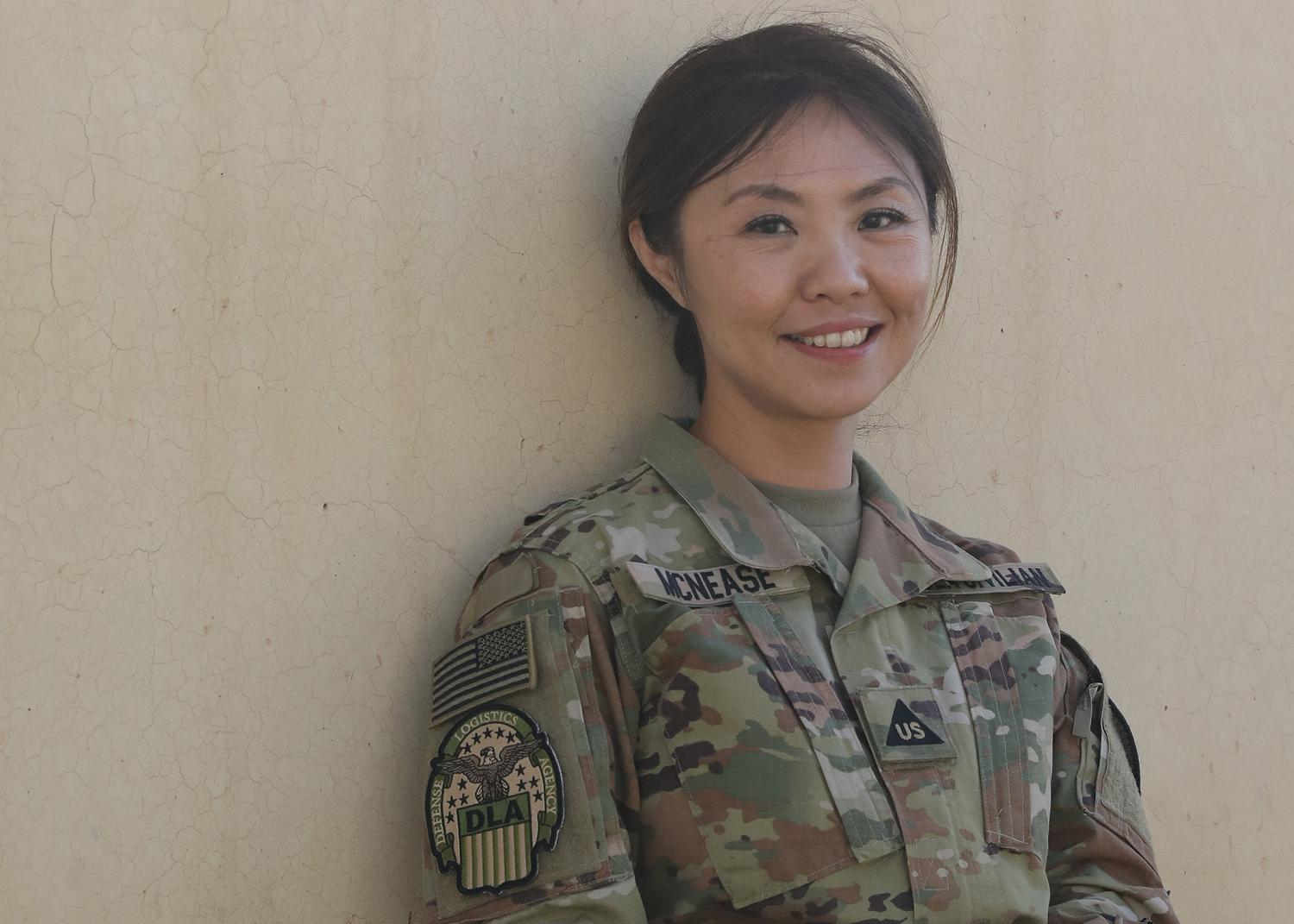 Defense Logistics Agency Civilian Gee Hyun McNease, deployed as the deputy commander of the DLA Support Team-Kuwait at Camp Arifjan, Kuwait, is a native of the Republic of Korea. McNease said her first consciousness of America was from her parents, who were grateful to American Soldiers who liberated her country from the Communists. (U.S. Army photo by Staff Sgt. Neil W. McCabe)

CAMP ARIFJAN, KUWAIT  –  Personnel deployed here opened up about their own personal histories and how their Asian culture influences their service to the U.S. Army for Asian American Pacific Islander Heritage month.

Army Reserve Sgt. 1st Class Jeremy Crawford, the noncommissioned officer in charge of information systems and communications shop, or G-6, for the 1st Theater Sustainment Command's operational command post, said he grew up in Wahiawa on the Hawaiian island of Oahu and he has a mixed Asian heritage.

"In Hawaii, there is a mix of all sorts of cultures, not just Hawaiian and Polynesian, but all the Asian ethnicities--all of them: Japanese, Chinese, and Korean--like all the different cultures inter-mixed," he said.

"There is not a lot of conflicts, I would say, everyone pretty much understands a little bit of everyone else's culture," he said.

Crawford said he joined the Army Reserve in 2004, originally enlisting to be an infantryman, or 11 Bravo, in the famed 442nd Infantry Regiment, while he was a high school junior using the delayed enlistment program.

"My mother did not know about the military, we did not come from a military family, so she really didn't know what an 11 Bravo was," he said.

"In Hawaii, there is that warrior spirit," he said. "It is kind of weird being in this environment, where back home, if you had a conflict, you scrap--you can't do that here. Now, if you have that conflict, you have to stand at parade rest and you take it."

When his mother found out he was joining the infantry, she went to the recruiting station and persuaded the recruiter to change the contract, he said. Instead of joining the "Go for Broke" Soldiers, he was assigned to a support unit at the U.S. Army Pacific headquarters at Fort Shafter, Hawaii.

Crawford said he got his chance to deploy with the 442nd when its 100th Battalion mobilized to Camp Virginia, Kuwait, in 2008-2009.

The battalion is the only ground combat force left in the Army Reserve inventory, and its companies are spread out onto American possessions in the Pacific.

Each company has its own qualities, he said. "They are similar and different at the same time."

"The culture of family and togetherness played a big part in the unit cohesion--very tight-knit, very tight-knit relationships between people," he said.

"It's an interesting dynamic, especially from what I noticed about Soldiers from Samoa," he said. "They have their own cultural dynamic and rank structure that they have on the outside, independent from the Army."

The status structure is based on tribal protocols and familiar relationships in Samoa, Crawford said.

"It is interesting to be a part of it, definitely something I haven't seen in any other units," Crawford said. "In that culture, it is understood that's how it is."

Gee Hyun McNease, the deputy commander of the Defense Logistics Agency Support Team-Kuwait and a native of the Republic of Korea, said her first consciousness of America was from her parents.

"I was born in Inchon and I grew up in Seoul,” McNease said. Inchon is a major seaport on the east coast of South Korea, close to the capital city of Seoul, and the site of the 1950 amphibious invasion by United Nations forces under the command of General of the Army, Douglas MacArthur.

"I still remember there was a big statue of General MacArthur at my elementary school," she said. "We used to have a drawing contest at my school, where all the children would all draw the general--I used to think about him a lot."

"He is like a hero to everybody, especially my mom and dad. My parents' generation, they still remember and are grateful for the U.S. forces who provided their freedom," she said. "It is still real to me. I used to hear about it all the time."

These feelings about America and American Soldiers make her proud to serve in the Department of Defense and to be with U.S. Soldiers in Kuwait, she said.

McNease said she came to the United States as an Army wife in 1992, first in Hawaii, then Washington, and next to Germany. It was in Germany in 2002 that she first started working for DLA. "I grew up with the DOD, both personally and in my career."

Right away, she noticed differences between American culture and the Korean culture she was raised in, she said.

"I definitely have to say the diversity in the United States is different between America and Korea," she said.

"Korea is a homogeneous society, so literally, they expect very similar things from each other. But in the States, there are not only many races, but there are so many different cultures and expectations," McNease said.

Army Reserve Sgt. Kaison McCullough, who deployed with the 310th Sustainment Command (Expeditionary) whose Soldiers man the 1st Theater Sustainment Command's operational command post, said he grew up in a small village roughly one hour from the city of Udon, Thailand.

McCullough said he came to the U.S. in 1980 with his mother and siblings when he was a 9-year-old boy and the change was very positive for him.

"I wanted to go to a better school. Back in Thailand, I stopped going to school after I finished the third grade," he said. "They had a school, but pretty much, it was just me, my two brothers and my grandma. Grandma didn't have a job, so, pretty much, I went out to find food."

The Norfolk, Virginia, resident said finding food was a priority every day.

"Little Kaison would take his brothers out for fish and rice and whatever else we could find," he said.

Sometimes, he and his brothers would fish in a nearby lake or gather rice from a local rice patty. Another option was the local Buddhist temple.

"People would come offering food to the monks and they had leftovers," said the sergeant, who first served in the Marine Corps before a 10-year stint in the Merchant Marine serving oil rigs in the Gulf of Mexico, who joined the Army Reserve in 2005 to resume his military career.

One of the monks would look out for him when there was extra food, he said.

When he arrived in America, McCullough said he thought it was going to be just like in the westerns.

"At first, I thought America was just like a big Texas with cowboys running around and horses and all that," he said. "I came here and it was different: 'Where are all the horses?'"

The other big difference he said he noticed was the lack of deference for elders by Americans.

"Over there, they respect elders, and it's 'Yes, sir' and 'Yes, ma'am.' But when I came here, I didn't see too much of that. Over there, you listened to your mom and dad."

McCullough said he is an American now, but he still retains the values of his country and he is glad the Army observes Asian American and Pacific Islander Heritage Month. "It's good situational awareness, you know, that way more people will be educated about different cultures."

Army Reserve Capt. Jo Karge, the 1st TSC-OCP secretary to the deputy commanding general and knowledge management officer, said her father was born in Thailand, her mother is a white American and she grew up in Virginia connected to the local Thai and Asian community there.

"Thai was one of the first languages I learned as a child, so going to elementary school was a little bit of an experience for me," she said.

The captain said every Sunday her immediate family met with members of her father's family, along with other Thai families.

Karge said in her experience the commemoration of Asian American and Pacific Islander Heritage Month does not amount to a whole lot in the scheme of things.

"It feels like it's just another month to recognize a different culture," she said. "There's not much that goes into celebrations, as far as exploring the different cultures, but I do enjoy certain heritages when they share their food."

Karge said one of the things she cherishes about people from Asian cultures is the way they celebrate their cuisine. "A lot of Asian people like to cook, so there are different foods, Islander food to Thai food to Vietnamese pho and things like that."

The Killeen, Texas, resident said she noticed that Asian Soldiers also have that same special connection to food and community.

"One of the things I have noticed about Asian Soldiers is that food is a big thing that brings people together, so in the event that someone has a traumatic incident or a celebration, like a baby shower or anything like that, the Asian Soldiers, it seems, always bring the best food," she said.

"They always have some kind of food item to say, 'Hey, I hope you feel better’ or congratulations, too, that brings everybody together."