USARCENT forges ahead with new technology 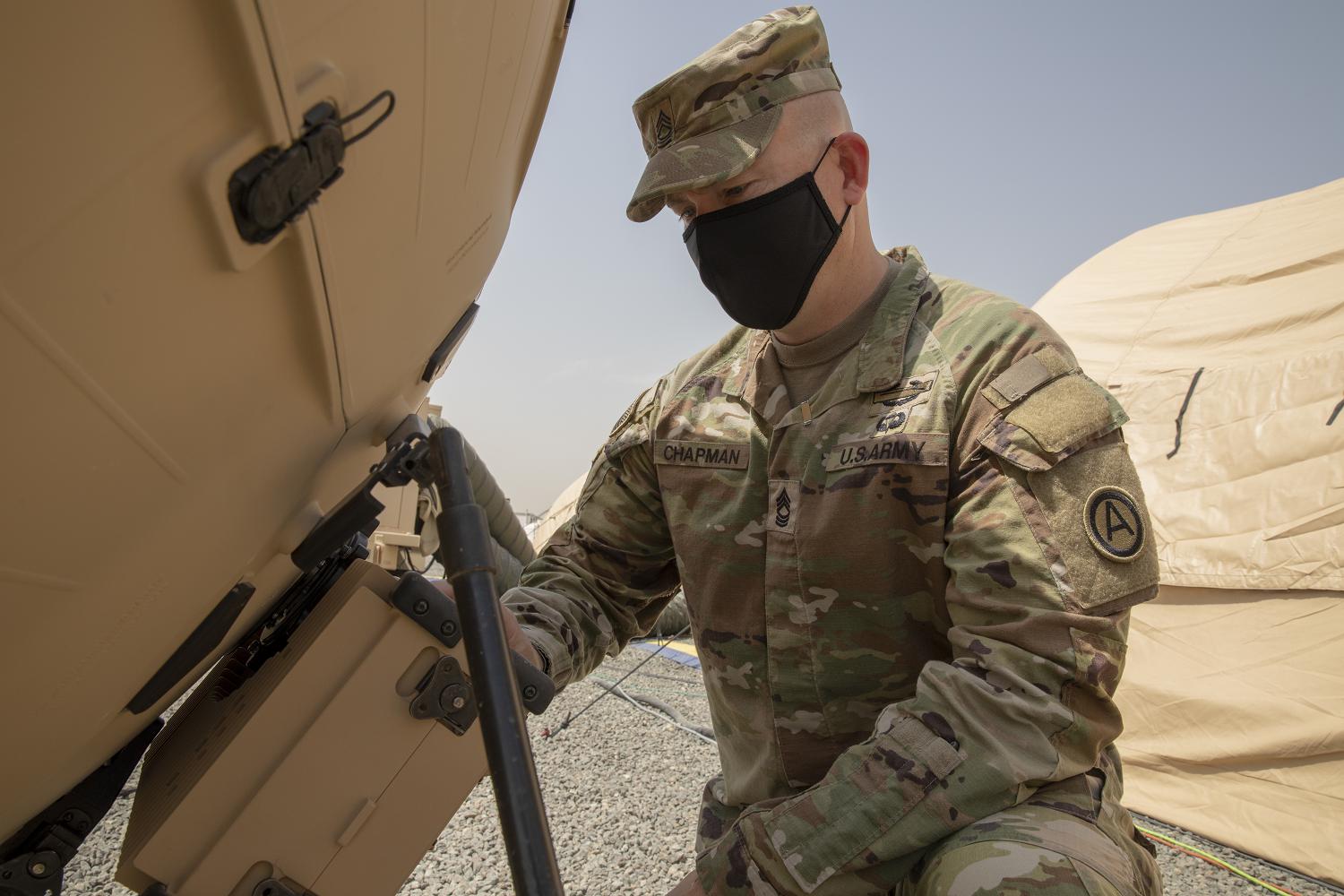 KUWAIT 04.22.2021 –  CAMP ARIFJAN, Kuwait - The ability to adapt is widely considered to be one of the most important qualities a person can achieve. Soldiers with U.S. Army Central’s Information Systems Division (ISD) G6 have a firm understanding of just that important role adaptability plays in readiness.

“What we are doing is assessing metrics in comparison to what the Army already has in its inventory based on where new technology is leading us,” said Master Sgt. Brian Chapman, ISD Noncommissioned Officer in Charge for UARCENT G6.

USARCENT continues to maximize exercises like this to improve its communication capabilities and maintain a lethal and effective fighting force. What makes the RECP standout is the Soldiers ability to move quickly with little support.

Chapman said, “The modernization effort is it's lighter, it's quicker, it's more mobile, it's less manpower. I don't need big generators for it. I can put it in a hotel room. I don't need a lot of infrastructure for it, and I can move it very quickly and very lethally across the battlefield.”

Experience with the old systems was still invaluable to the success of the validation and allowed leaders to learn about the new system.

USARCENT G6 Senior Enlisted Advisor, Sgt. Maj. Elizabeth Dillon, said, “Configuring this package took experience that younger Soldiers don’t necessarily have. Just because you are a senior doesn’t mean you stop learning. It also doesn’t mean that you can’t be out running new equipment. You can never stop learning or stop being at the forefront of new Army ideas.”

One of the key benefits of the RECP is its ability to tie into old and new technology as it becomes available. The RECP package can interconnect with past technologies and will be able to plug into new ones for years to come. Part of the beauty of the RECP package is also its ability to connect data through multiple paths. It can tie into anything with a line of sight, a frequency or even plug into a 5G cellular network.

“Regardless of the method of signal transport we can tie into it,” said Chapman.

Teamwork is also a key component in any organization, and this recent validation also provided opportunities to strengthenthe relationships between the 335th Signal Command, Regional Cyber Center - Southwest Asia and the 160th Signal Brigade.

Dillon said, “We built better relationships.. This RECP is truly a collaborative piece of equipment. We cannot do this type of rollout without everyone involved.”

The validation process also allowed USARCENT G6 Soldiers to use the equipment hands-on instead of through a computer screen, allowing them to use the RECP as they would in a wartime situation..These kinds of relationships and experiences help to make USARCENT and the Army a lethal and effective fighting force.

"Understanding our strengths and how we work together is how we win ... at everything,” Dillon added. “At the end of the day, nothing beats working together face-to-face. Even when we meet challenges and personal differences, in-person requires us to work those out, and not hide behind a screen or not be heard. That is what helped make us successful."

This RECP is the next step of communication modernization and demonstrates one more facet of USARCENT and the Army’s ability to adapt to an ever-changing world. As those future technologies arrive, USARCENT will be ready to adapt to the changes, Chapman said.