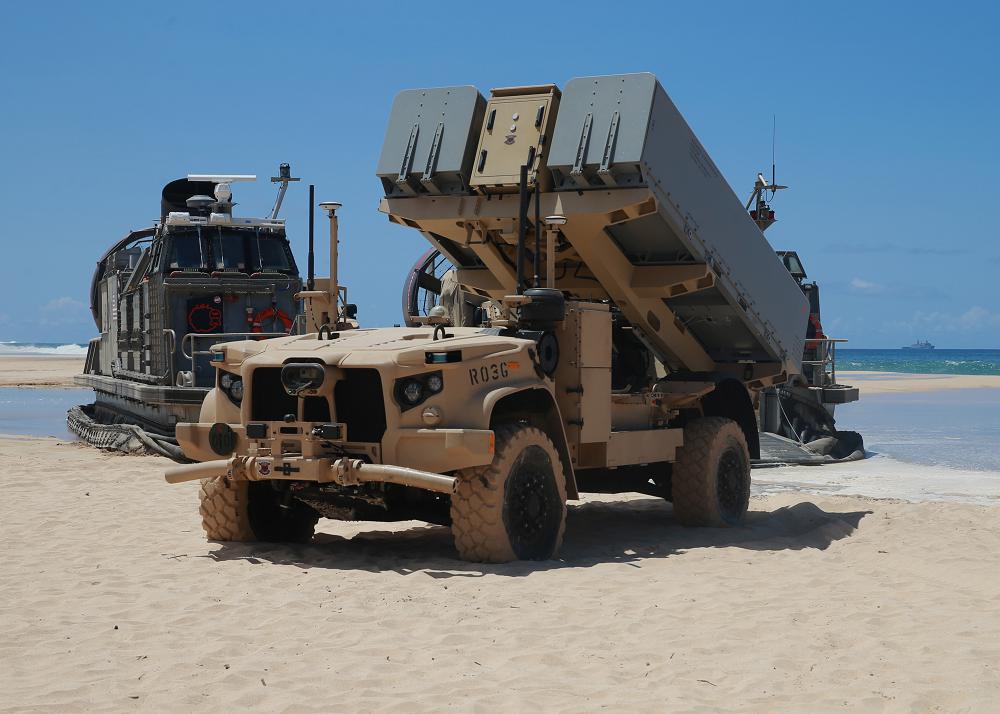 KEKAHA, Hawaii (Aug. 16, 2021) A Navy Marine Expeditionary Ship Interdiction System (NMESIS) launcher deploys into position onboard Pacific Missile Range Facility Barking Sands. The NMESIS and its Naval Strike Missiles participated in a live-fire exercise as part of Large Scale Exercise (LSE) 2021. During the training, a Marine Corps fires expeditionary advanced base (EAB) sensed, located, identified and struck a target ship at sea, which required more than 100 nautical miles of missile flight. The fires EAB Marines developed a targeting solution for a joint force of seapower and airpower which struck the ship as the Marines displaced to a new firing position. The Marine Corps EAB Operations concept is a core component of the Force Design 2030 modernization effort. Photo by Major Nick Mannweiler.

The Marine Corps’ top modernization priority is fulfilling the requirement for a ground-based anti-ship missile capability.

The operational requirement for this ship-killing capability is a relatively new development stemming from the Commandant’s Planning Guidance and the Corps’ Force Design 2030 efforts.

When integrated into sensor and communication networks supporting a naval or maritime kill chain and synchronized with the employment of other missile systems, the Marine Corps’ medium-range missile battery will serve as a component of the Naval expeditionary force’s stand-in force in support of the naval sea control effort, said Fraser.

MCSC plays a critical role in equipping Marines with the next-generation, modernized capabilities needed to meet and defeat an evolving threat. In two years, the Long Range Fires program office at MCSC has acquired NMESIS, an anti-ship missile capability meeting the GBASM requirement.

“In a nutshell, NEMSIS is the ground-based launcher that gives us the ability to fire the Navy’s latest anti-ship missile, the Naval Strike Missile, or NSM.”

“While the GBASM requirement can encompass multiple materiel solutions and systems under the GBASM requirement, NMESIS is the first system for the Marine Corps providing that ground-based, anti-ship missile capability,”  said Joe McPherson, program manager for Long Range Fires at MCSC.

While the Department of Defense possesses ships and aircraft with anti-ship missile capabilities, McPherson said that the NMESIS uniquely complements these efforts.

“Everything our adversaries have designed over the last 20-30 years are intended to counter [the DOD’s] ships and aircraft,” said McPherson. “The Marine Corps bringing a ground-based solution complicates [the adversary’s] ability to counter our anti-ship capabilities since ground-based launchers, as we’ve found in previous wars, are hard to find. This is what NMESIS brings to the fight—a launcher that is survivable inside the enemy’s weapons engagement zone.”

A key element of the system’s survivability is its teleoperated transport vehicle, called the Remotely-Operated Ground Unit for Expeditionary Fires.

“By going with a teleoperated vehicle, we increase the survivability of the crews because they’re not co-located with the launcher, which tends to be what gets targeted,” said McPherson.

Marines can control the ROGUE-Fires with a gamelike remote controller or command multiple launchers to autonomously follow behind a leader vehicle. The ROGUE-Fires vehicle, built on a Joint Light Tactical Vehicle platform, provides the Corps with a robust expeditionary system capable of operating anywhere.

Maneuverability and mobility are critical components of NMESIS, and Marines’ ability to operate ROGUE-Fires in both autonomous and teleoperated modes provides the operational commander with strategic options in his battlespace. The ability to displace crews and vehicles in a remote manner apart from one another is a critical step in increasing the survivability of Marines.

McPherson made sure to point out that the NMESIS is not considered an autonomous launcher; Marines are required to directly interact with the fire control system in order to fire the missile.

“The actual fire control system that fires the missile is completely separate from all of the self-driving and autonomy,” said McPherson. “There’s always a Marine who does the mission plan and actually fires the missile.”

The program office selected the Navy’s NSM after extensive market research and analysis on options within industry and the DOD. McPherson noted that missile development is a costly and potentially risky endeavor. The program office used a proven missile solution to eliminate that extra cost and mitigate risk.

“[The program office has] made excellent progress by adopting the Navy’s missile,” said McPherson. “We’ve been able to focus on developing the launcher itself. We’ve built multiple prototypes, successfully conducted multiple firing tests, gone through our initial mobility tests, and we’re on a good path to transition into the next phase of the program.”

“We made it fly a [non-linear] route to simulate what Marines would experience in a real-world situation, where they may have to navigate around friendly and neutral shipping or any other impediments between the ground-based firing position and the target,” said McPherson. “The ability for us to provide waypoints and plan a complex route improves the survivability and utility of the system before impact.”

Though the NMESIS launch at LSE 21 was not an official test associated with MCSC’s acquisition of the system, it provided an opportunity for MCSC and CD&I to gain valuable user feedback from the Marine community who will use the system in the future.

“We hope to get this in the hands of more Marines so we can get that operational feedback, and so they can get more reps and experience on the system,” said Lt. Col. Ryan Collins, Rockets and Artillery Capabilities Integration Officer, Marine Corps Capabilities Development Directorate, Combat Development and Integration. “Because this is a new operational concept, we think it’s very important for them to get involved early in the process.”

In October, the program office plans to send NMESIS assets to Marines in Camp Pendleton, California, so they have additional opportunities to familiarize themselves with the system.

“They’ll be exercising with the system continuously for the next two years, so we can gain user feedback and develop all of the technical techniques and procedures for this new operational concept,” said Collins. “This will also give us the opportunity to tie in all of the [command and control] and higher-level capabilities that are going to be needed to fully implement the system. Ultimately, Marines are slowly transitioning into getting the system in their hands and getting an understanding of it.”

The program office anticipates deploying their initial set of launchers to a Marine Littoral Regiment by the end of 2023, achieving a significant milestone for Force Design.