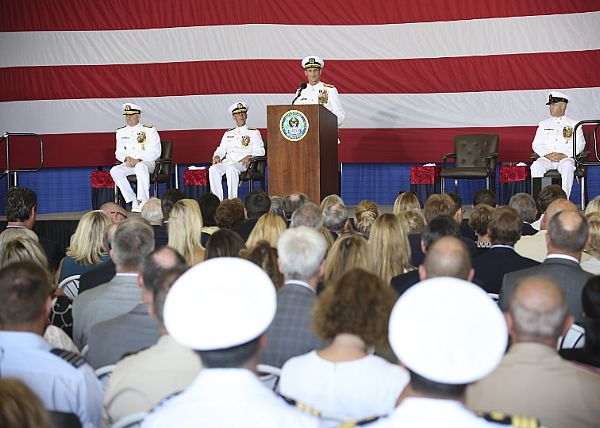 “Although deeply consequential, the meaning of this establishment can be summarized simply as a dynamic response to a dynamic security environment — a security environment clearly articulated in the National Defense Strategy,” said Richardson. “We first need to understand this competitive security environment and why it demands every ounce of our tenacity, ingenuity and fighting spirit. Then we can focus on the mission and how best to accomplish it; 2nd Fleet will enhance our capacity to maneuver and fight in the Atlantic, and as a result, help to maintain America’s maritime superiority that will lead to security, influence and prosperity for our nation.”

Lewis assumed command as the first commander of the re-established C2F, after his confirmation by the Senate June 28. U.S. 2nd Fleet will be headquartered in Norfolk. All of Lewis’s operational command tours have been on the East Coast making him intimately familiar with operations in the Atlantic. Most recently, he commanded Carrier Strike Group 12 and deployed with USS Theodore Roosevelt (CVN 71) to the U.S. 6th and 5th Fleet areas of operation.

“I am truly honored to lead this fleet. U.S. 2nd Fleet has a storied history, and we will honor that legacy,” said Lewis. “However, we will not simply pick up where we left off. We are going to aggressively and quickly build this command into an organization with operational capability. We will challenge our assumptions, recognize biases, learn and adapt from failures so as to innovate in order to build a fleet that is ready to fight. Ready to fight – so we don’t have to.”

U.S. 2nd Fleet will exercise operational and administrative authorities over assigned ships, aircraft and landing forces on the East Coast and the North Atlantic. Additionally, it will plan and conduct maritime, joint and combined operations as well as train and recommend certification of combat ready naval forces for maritime employment and operations around the globe. U.S. 2nd Fleet will fall under operational control of U.S. Fleet Forces Command.

The United States Second Fleet is a numbered fleet in the United States Navy responsible for the East Coast and North Atlantic Ocean. The Fleet was established after World War II and was deactivated in 2011 based on the perception the potential military threat posed by Russia had diminished. On May 4, 2018 Chief of Naval Operations Admiral John M. Richardson announced plans to reestablish Second Fleet amid heightened tensions between NATO and Russia.