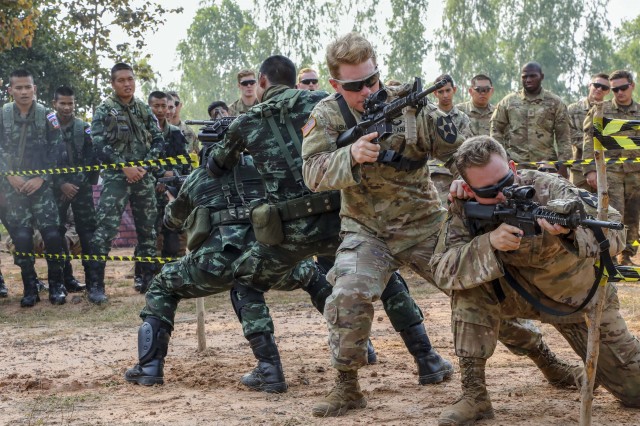 Soldiers from 2nd Infantry Division's 1st Stryker Brigade Combat Team and the Royal Thai Army conduct training during the Cobra Gold exercise in Phitsanulok, Thailand, Feb. 13, 2019. Cobra Gold is the largest theater security cooperation exercise in the Indo-Pacific and is an integral part of the U.S. commitment to strengthen engagement in the region. (Photo Credit: Sgt. Alvin Reeves)

WASHINGTON -- The Army’s chief of staff discussed how to win in great power competition within the Indo-Pacific region Friday after he traveled there earlier this month to meet with military leaders.

“The last thing that anybody wants is some type of conflict,” said Gen. James C. McConville. “Great power competition does not mean that there is a great power conflict.”

U.S. allies and partners, he said, want a free and open region where they have access to support their economies.

“What they’re interested in is really stability and security in the region, so all can prosper,” he said during a discussion hosted by the Center for Strategic and International Studies.

To ensure this, the general said the U.S. military is creating a joint force solution and continually bringing its allies closer together to deter near-peer threats.

Using lessons from its own multi-domain experiments, the Army has partnered with other services in developing Joint All-Domain Command and Control, which would enable the joint force to better integrate efforts across all domains.

“We’re working very closely with our joint partners to make sure that we’re synchronized with our concepts,” he said.

A key part in this effort will be new units, he said, including the Army’s Multi-Domain Task Forces that are being designed to provide long-range precision effects and fires.

The units include elements from a fires brigade and an I2CEWS detachment, which would have intelligence, information operations, cyber, electronic warfare and space assets to counter enemy anti-access/area-denial, or A2/AD, capabilities.

As part of a U.S. Army Pacific-led pilot, the first task force has already conducted exercises throughout the region. There are plans to establish a similar task force in Europe next year, and to stand up a third one in 2022 that would also operate in the Indo-Pacific region.

A task force could even one day be based at a forward location in the region, Lt. Gen. Randy George, commander of I Corps, said in May during the Indo-Pacific Landpower Conference.

“Key terrain will always be a critical aspect and we must combine efforts to protect sovereignty, international law and the rules-based order,” George said.

Security Force Assistance Brigades -- part of a re-focused train, assist and advise strategy that envisions the specialized units working with allies and partners around the world -- could also help strengthen the armies of foreign nations concerned about America’s competitors.

“We can send them into the region and they can advise and assist our allies and partners [and] develop strong relationships,” McConville said.

The service’s modernization priorities have also been pursuing new systems, including hypersonic weapons, extended range cannons and precision missiles that can sink ships -- all potential options against enemy A2/AD capabilities, he said.

India has become an important ally in the region as well, he noted, adding the nation was the reason U.S. Pacific Command changed its name to U.S. Indo-Pacific Command in 2018.

A stronger defense agreement between the U.S. and India would be very helpful to the stability and security in the region, the general said.

“As we have discussions, we’re looking for common interests and how we can improve the relationship,” he said.