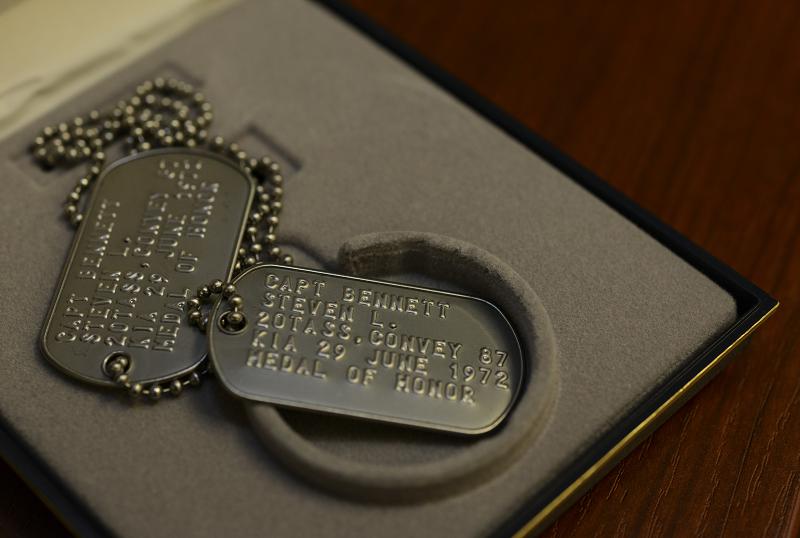 We all know what dog tags are — those little oval disks on a chain that service members wear to identify themselves in combat. But have you ever wondered how and when that tradition started, and why they're called dog tags?

We did some research to find the answers.

Origins of the "Dog Tag" Nickname

According to the Army Historical Foundation, the term "dog tag" was first coined by newspaper magnate William Randolph Hearst. In 1936, Hearst wanted to undermine support for President Franklin D. Roosevelt's New Deal. He had heard the newly formed Social Security Administration was considering giving out nameplates for personal identification. According to the SSA, Hearst referred to them as "dog tags" similar to those used in the military.

Other rumored origins of the nickname include World War II draftees calling them dog tags because they claimed they were treated like dogs. Another rumor said it was because the tags looked similar to the metal tag on a dog's collar.

Regardless of where the nickname started, the concept of an identification tag originated long before that.

Unofficially, identification tags came about during the Civil War because soldiers were afraid no one would be able to identify them if they died. They were terrified of being buried in unmarked graves, so they found various ways to prevent that. Some marked their clothing with stencils or pinned-on paper tags. Others used old coins or bits of round lead or copper. According to the Marine Corps, some men carved their names into chunks of wood strung around their necks. 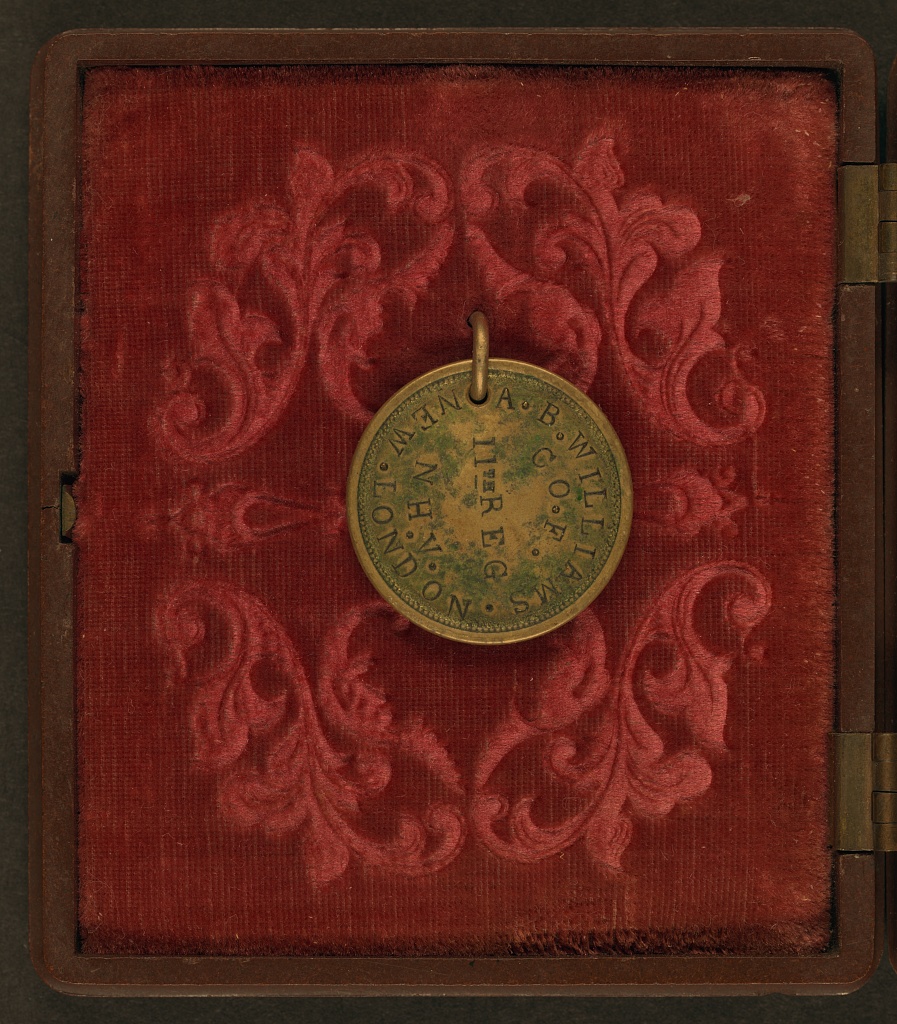 This dog tag belonged to Union Army Cpl. Alvin B. Williams of Company F, 11th Regiment New Hampshire Volunteers. Hailing from New London, N.H., Williams enlisted on Aug. 11, 1862 at the age of 18. He was killed May 12, 1864, near Spotsylvania Court House in Virginia.

Those who could afford it bought engraved metal tags from nongovernment sellers and sutlers — vendors who followed the armies during the war. Historical resources show that in 1862, a New Yorker named John Kennedy offered to make thousands of engraved disks for soldiers, but the War Department declined.

By the end of the Civil War, more than 40% of the Union Army’s dead were unidentified. To bring that into perspective, consider this: Of the more than 17,000 troops buried in Vicksburg National Cemetery, the largest Union cemetery in the U.S., nearly 13,000 of those graves are marked as unknown.

The first official request to outfit service members with ID tags came in 1899 at the end of the Spanish-American war. Army Chaplain Charles C. Pierce — who was in charge of the Army Morgue and Office of Identification in the Philippines — recommended the Army outfit all soldiers with the circular disks to identify those who were severely injured or killed in action.

It took a few years, but in December 1906, the Army put out a general order requiring aluminum disc-shaped ID tags be worn by soldiers. The half-dollar size tags were stamped with a soldier's name, rank, company and regiment or corps, and they were attached to a cord or chain that went around the neck. The tags were worn under the field uniform. 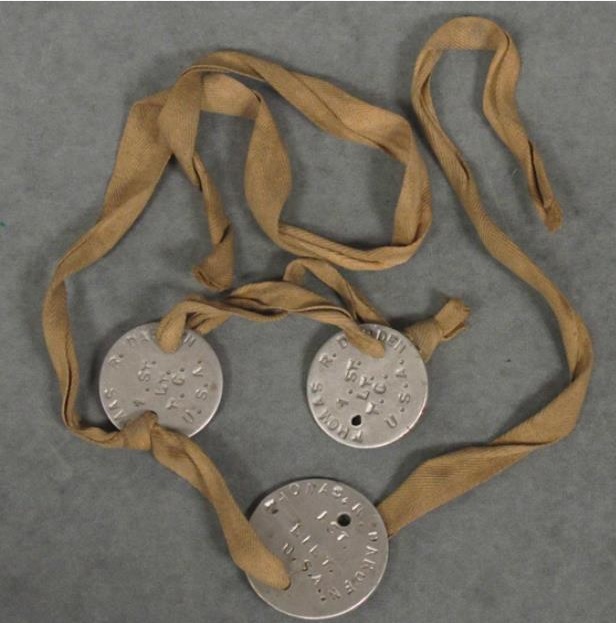 These original World War I dog tags belonged to Navy and Army veteran Thomas R. Darden. The tags are tied with twill rope or tape. Darden served in the Navy from 1903-1908 and in the Army as an officer from 1917 through the end of the Great War.

The order was modified in July 1916, when a second disc was required to be suspended from the first by a short string or chain. The first tag was to remain with the body, while the second was for burial service record keeping. The tags were given to enlisted men, but officers had to buy them.

The Navy didn't require ID tags until May 1917. By then, all U.S. combat troops were required to wear them. Exact size specifications were put in place, and the tags also included each man's Army-issued serial number. Toward the end of World War I, American Expeditionary Forces in Europe added religious symbols to the tags — C for Catholic, H for Hebrew and P for Protestant — but those markings didn't remain after the war.

During World War I, Navy tags were a bit different than Army's. Made of monel — a group of nickel alloys — they had the letters "U.S.N." etched on them using a specific process involving printer's ink, heat and nitric acid. If you were enlisted, the etching included your date of birth and enlistment, while officers' included their date of appointment. The biggest difference was the etched print of each sailor's right index finger on the back, which was meant to safeguard against fraud, an accident or misuse. 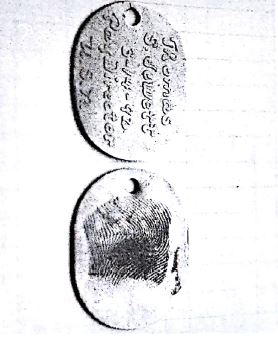 During World War I, Navy identification tags contained a fingerprint.

According to the Naval History and Heritage Command, the ID tags weren't used in between World War I and World War II. They were reinstated in May 1941, but by then, the etching process was replaced with mechanical stamping.

Meanwhile, the Marines had been required to wear ID tags since late 1916. Theirs were a mix of the Army and Navy styles.

By World War II, military ID tags were considered an official part of the uniform and had evolved into the uniform size and shape they are today — a rounded rectangle made of nickel-copper alloy. 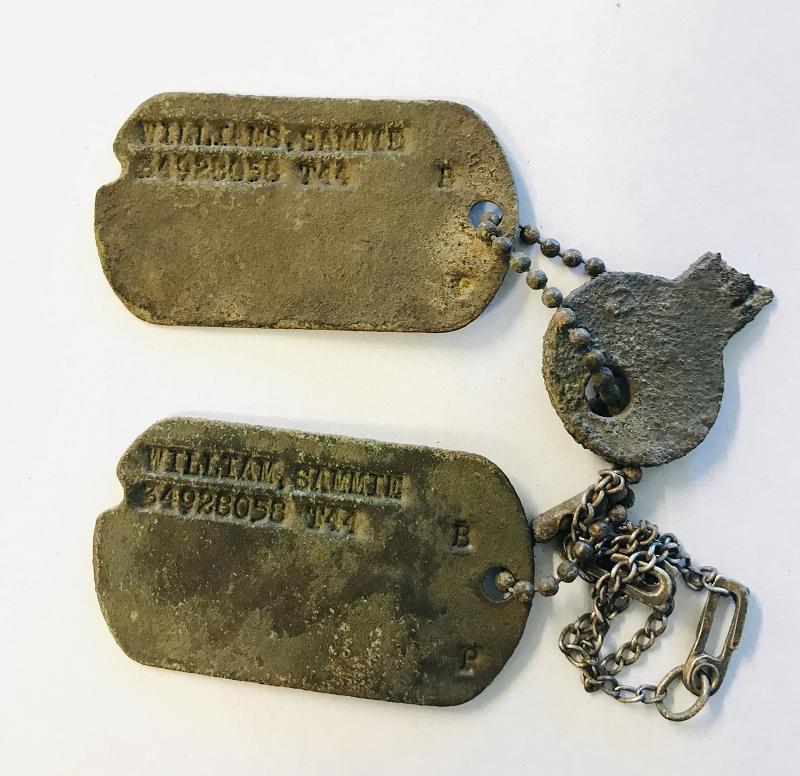 Local German Simon Krieger-Pleus discovered a pair of World War II U.S. military identification tags during a nature walk through the prominent trails in July. Through extensive research, it was found that Pvt. Sammie Lee Williams, at the age of 22, enlisted on March 14, 1944, and found himself deploying from Fort Benning, Georgia, to Germany in a time of war. Williams survived, returned to the U.S. and lived to be 81. (Courtesy photo)

Each was mechanically stamped with your name, rank, service number, blood type and religion, if desired. An emergency notification name and address were initially included on these, but they were removed by the end of the war. They also included a "T" for those who had a tetanus vaccination, but by the 1950s that, too, was eliminated.

During World War II, Navy tags no longer included the fingerprint. By the war's end, they also included the second chain that the Army had implemented decades before.

At this time, all military tags included a notch in one end. Historians say the notch was there due to the type of machine used to stamp the tags. By the 1970s, those machines were replaced, so the tags issued today are now smooth on both sides.

Regulations have gone back and forth regarding whether the two tags should stay together or be separated. In 1959, procedure was changed to keep both dog tags with the service member if they died. But by Vietnam, it was changed back to the original regulation of taking one tag and leaving the other.

For Marines, a person's gas mask size was eventually included on the tags. 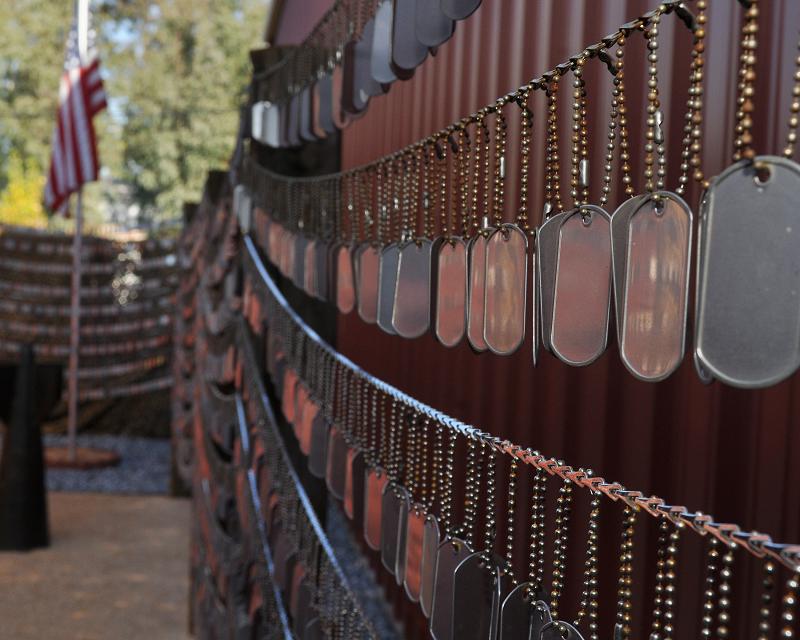 Dogs tags hang from the Iraq/Afghanistan Dog Tag Memorial at the Museum of the Forgotten Warrior outside of Beale Air Force Base, Calif., Nov. 10, 2011. The memorial was built to honor all of the men and women who have been lost during the Iraq and Afghanistan wars and contains over 6200 individual dog tags. (U.S. Air Force photo by Staff Sgt. Jonathan Fowler)

By 1969, the Army began to transition from serial numbers to Social Security numbers. That lasted about 45 years until 2015, when the Army began removing Social Security numbers from the tags and replacing them with each soldier's Defense Department identification number. The move safeguarded soldiers' personally identifiable information and helped protect against identity theft.

Considerable technological advances have come along since Vietnam, including the ability to use DNA to identify remains. But despite these advancements, dog tags are still issued to service members today. They're a reminder of America's efforts to honor all those who have served — especially those who made the ultimate sacrifice.