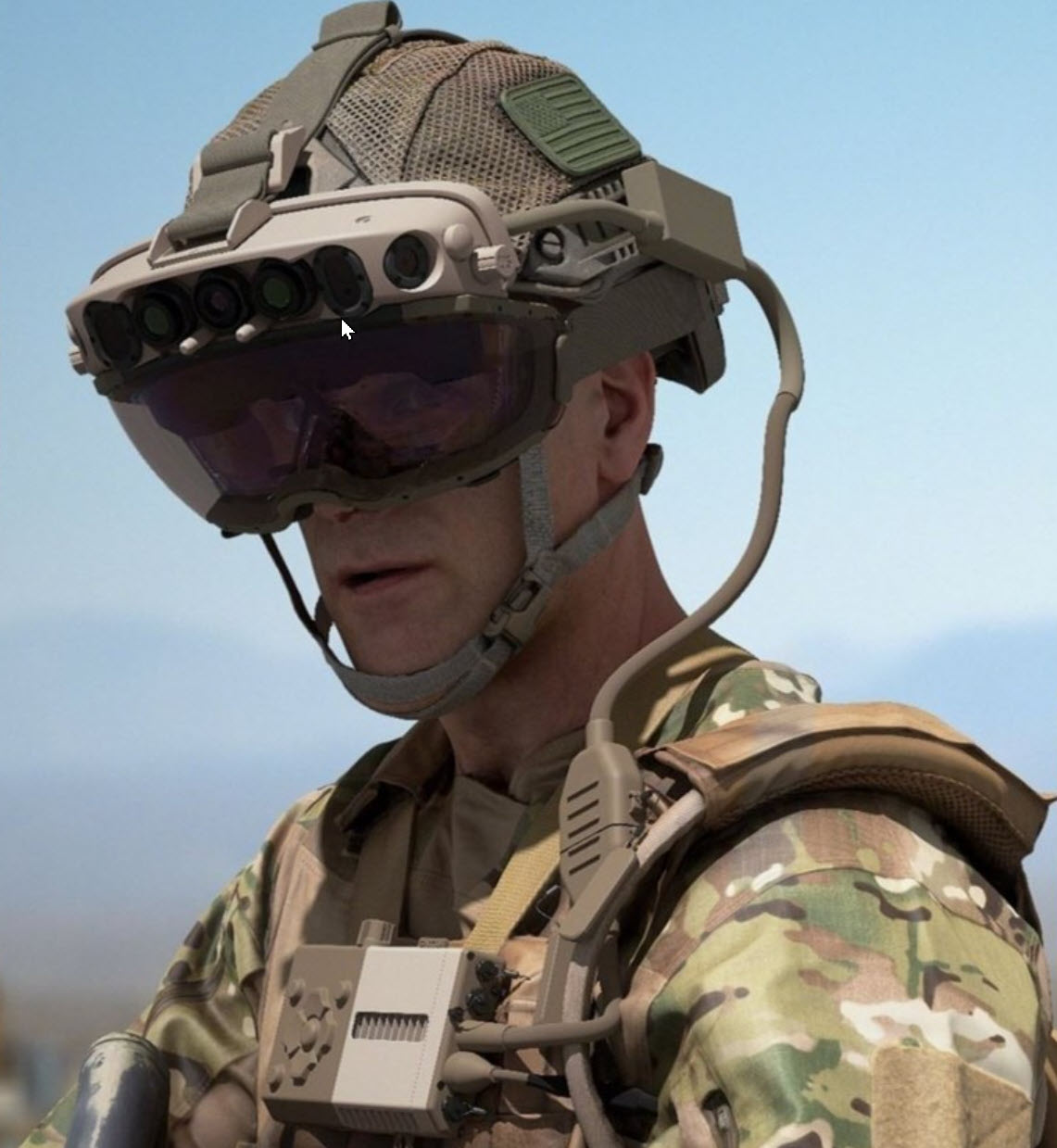 FORT BENNING, Ga. – The Army-led team of developers creating the Integrated Visual Augmentation System is wrapping up the third major milestone testing and demonstration event this week at Fort Pickett, Va., where Soldiers and Marines have been putting the system, known as IVAS, through a number of field exercises since Oct. 18.

IVAS is designed to enhance the lethality and survivability of the Army’s Close Combat Force through a combination of technologies and augmented reality capabilities delivered in the form of a Heads-Up Display device, much like the famed HoloLens developed by Microsoft, which is, in fact, partnering with the Army to develop and produce the system.

IVAS is one of the Army Future Command’s 31 original signature modernization efforts, headed by the Soldier Lethality Cross Functional Team (SL CFT) at Fort Benning, Ga., under the leadership of Brig. Gen. David Hodne, who also serves as the Chief of Infantry. It’s a single platform that allows the Soldier to fight, rehearse, and train, because it leverages networked information sharing and mixed and augmented reality technologies. IVAS is one of the SL CFT’s efforts to help resolve an erosion in combat superiority between

U.S. and near peer competitors around the world as identified in the 2018 National Defense Strategy.

Whereas U.S. forces once “owned the night” in respect to combat overmatch in conditions of limited visibility, Hodne said, two decades of consistent and concentrated conflict across the Middle East has resulted in a parity among the world’s most capable combatants.

“Overmatch has always been defined in terms of two things; our lethality and our protection must exceed the lethality and protection of our adversaries,” Hodne said Oct. 30, as he addressed a group of Army senior leaders and Congressional representatives who attended the IVAS demonstration at Pickett. “In order to restore overmatch, we must restore lethality, and lethality means we can see, designate and move quickly through hours of limited visibility.

“In an environment where we share the night, the folks who can move faster, decide faster and think faster are the ones who have the advantage on today and tomorrow’s battlefield,” he said, citing the IVAS next generation situational awareness tools, high resolution operational and training simulations capabilities the Soldiers are testing at Pickett.

The event is the third in a series of four comprehensive large-scale tests, formally known as Soldier Touch Points, or STPs, scheduled at pivotal junctures in the 28-month program to bring together stakeholders from across the Army’s modernization enterprise with industry partners to assess technologies added or upgraded since the previous STP and test the latest system prototype in the field. This time around, participants from the 82nd Airborne Division and a contingent of Marines conducted company-size training events using the first militarized prototype of the IVAS. Events included land navigation, live fire, mission planning, rapid target acquisition, trench clearing, after action review using augmented reality, and more.

By the end of this event, Team IVAS, which includes the CFT, PEO Soldier, Microsoft, Combat Capabilities Development Command, and a number of labs and directorates within the modernization enterprise, will have collected more than 40,000 hours of Soldier data, said Brig. Gen. Tony Potts, the director of PEO Soldier.

The team employs a Soldier Centered Design methodology that involves Soldiers at every step of the process, from design to development, thereby reducing the traditional 10-year acquisitions timeline to roughly 28 months and eliminating the historical probability of fielding a system Soldiers reject. Soldier Centered Design means IVAS is designed and built by the Soldiers who give the constructive, candid feedback developers use to turn over new prototypes and upgrade systems constantly.

“If we want to develop systems at the speed of relevance, and systems that our Soldier want to use, this is the way we have to do it,” Potts said. “We have learned so much through Soldier Centered Design. Our real desire is to let Soldiers design it, and then our engineers build what they design. It’s about listening to our Soldiers.”

The STP was Staff Sgt Kaleb Kester’s first experience with IVAS and with the concept of Soldier Centered Design. After 12 years in the Army, the combat veteran said he sees “incredible potential” for the system and had no trouble learning to use it. “If you can use a smart phone, you can use IVAS,” he said, but there was one thing he didn’t understand.

“Why haven’t we always been doing it this way? I hate getting issued things I don’t even want or don’t need or can’t really use,” Kester said. “This is the way it should always be.”

The program, which remains on track to deliver the first IVAS in the fourth quarter of FY21, is funded through Other Transaction Authorities (OTA) and Middle Tier Acquisition Rapid Prototyping authorities to accelerate the development process by more than four years as compared to the DoD 5000 process.

Last month, Undersecretary of Defense for Acquisition and Sustainment Ellen Lord hailed IVAS as an example of success, having launched the program under an interim policy she implemented to circumvent problems inherent to traditional military acquisitions methodologies aimed at layered governance and risk aversion. In September, Deputy Secretary Norquist signed a directive that completes a comprehensive redesign of the DoD 5000 series acquisitions policies.

“So using this (interim) policy, we have 74 programs today using the middle tier acquisition pathway, including (IVAS),” Lord said Oct. 7 during a Pentagon briefing. “As a result, IVAS intends to rapidly field the capability in fiscal year 21 after conducting dozens of hardware prototypes and thousands of software builds through continuous iterations with Soldiers … the MTA pathway incentivizes powerful behaviors across the acquisition enterprise to quickly restore the Army's advantage in individual situational awareness, navigation, communications, and target acquisition.”

Army Chief of Staff Gen. James McConville said virtually the same last week after participating in the IVAS STP 3 demonstration, where he donned the IVAS to see firsthand how the system pairs to the Family of Weapons Sight – Individual to give the warfighter the ability to acquire a target from behind the relative security of a corner or an obstacle using the aided target acquisition capability.

Twenty years ago, McConville said, such capabilities would have been considered futuristic, “something you see in a movie,” and the acquisition timeline would have impeded progress.

“Historically, our acquisition cycle has taken a long time, ten to fifteen years,” he said. “(IVAS) was just an idea two or three years ago, and we were able to bring it to fruition quickly to what we saw today working together with industry, with our operators, and also our Soldiers with touch points along the way using the authorities that Congress has given us to rapidly, bring this capability to our Soldiers in the field. It’s safe to say that the future is here - now - and this is no longer in the realm of science fiction.”

Lt. Nicholas Christopher was one of the Soldiers from the 501st Parachute Infantry Regiment who put the system to the test in hinterlands of Fort Pickett’s operationally relevant environments. Christopher described the IVAS suite of capabilities just as the Chief of Staff.

“There are a lot of features on it that are futuristic, I guess you could say, including things like advanced battle tracking,” he said. “I can see where my entire platoon is projected on a map, and for me as a platoon leader, that's amazing, because there's a lot of guesswork that goes out the window. There's a lot of verbal communication over radios that I don't have to do anymore. It's very solid I can see how this is going to make a great impact on the way we fight.”