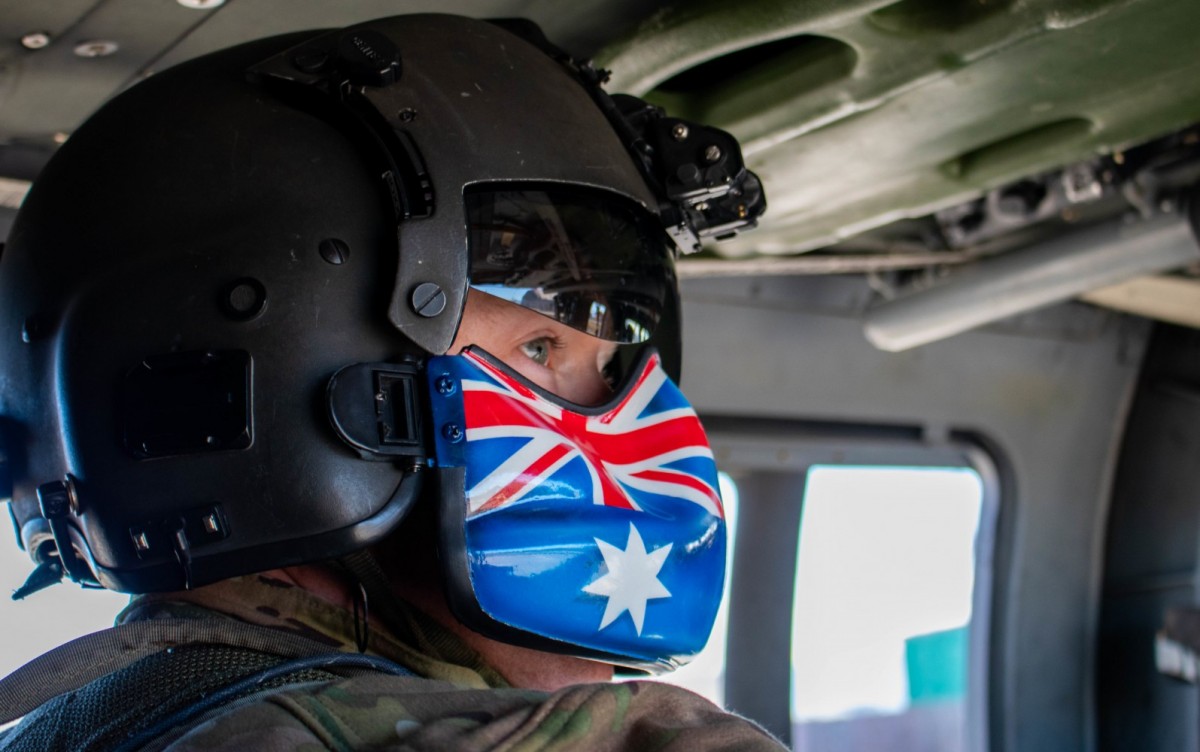 Boxx is deployed with Regional Command-East, Kosovo Force 28, in support of Operation Joint Guardian. KFOR is a NATO-led, multinational organization tasked with maintaining peace and stability in Kosovo. Boxx said treating patients in the air is the pinnacle achievement of his emergency medical services career.

But the road leading him to a career in the skies began long before he joined the National Guard. When Boxx was a child growing up in Mudgee, New South Wales, Australia, his family suffered a medical emergency. The medical personnel who responded made a lasting impression on him.

“I remember seeing their professionalism, the calmness they brought and their demeanor,” said Boxx. “That’s what I wanted to do. I wanted to pay it forward.”

Jesse Boxx, his father, served with the 213th Assault Support Helicopter Company, U.S. Army, during the Vietnam War. After his father’s service in Vietnam, Boxx’s mother was offered a job in Australia. Seeing an opportunity for adventure, his family moved to New South Wales in 1977, where Abraham Boxx was born.

Boxx grew up hearing his father's stories, and later carried on his legacy of service when he joined the Australian Army in 2007. During his 14 years in EMS, Boxx has accomplished much, but his focus has remained the same. Whether driving an ambulance or performing critical care tasks during a medical evacuation, he's dedicated to helping those in need.

“Whenever you see the military anywhere, a lot of people focus on the negativity or fighting,” said Boxx. “For me it was always about helping people and having a skill and a trade that went beyond firing a weapon system.”

Boxx's time in the Australian Army sent him on several deployments as a combat medic, to Malaysia, Singapore and Pakistan. But he said one mission to the Solomon Islands attached to an infantry unit was an eye opener. They were tasked with finding a war criminal in the area and gained support from the local population by offering to assist a clinic.

His team got to work. The infantry soldiers rebuilt the facility's roof and installed a water tank to help the village gain access to clean water. Meanwhile, Boxx ran the clinic with help from combat first aid soldiers and a local nurse, treating wounds ranging from gunshots to severe burns.

“It was an amazing opportunity for not only myself, but for some of the enlisted combat first aiders to really utilize their medical skills,” said Boxx.

After serving his time in the Australian Army and building up experience in ambulatory medical services, Boxx moved to the U.S. in 2016 and got certified as a flight paramedic. Just a year later, Boxx donned a different uniform and joined the U.S. Army National Guard. He moved to Washington, where he joined the 1-168th GSAB as a critical care flight paramedic. He also continued to work as a civilian paramedic for Life Flight Network.

The unit’s mission during KFOR 28 is to provide interfacility transport of wounded or ill Soldiers serving under NATO. Since less than three percent of their unit has deployed, said Wentlandt, Boxx’s vast military and civilian EMS experience has proven valuable during their time in Kosovo. While very few incidents occur that warrant emergency flight evacuations, Boxx is grateful for the opportunity to lend a helping hand when needed.

“The relief on people’s faces when we land when they know higher level care has gotten there or somebody is there to help them gets me every time,” Boxx said. “I never get sick of that feeling.”