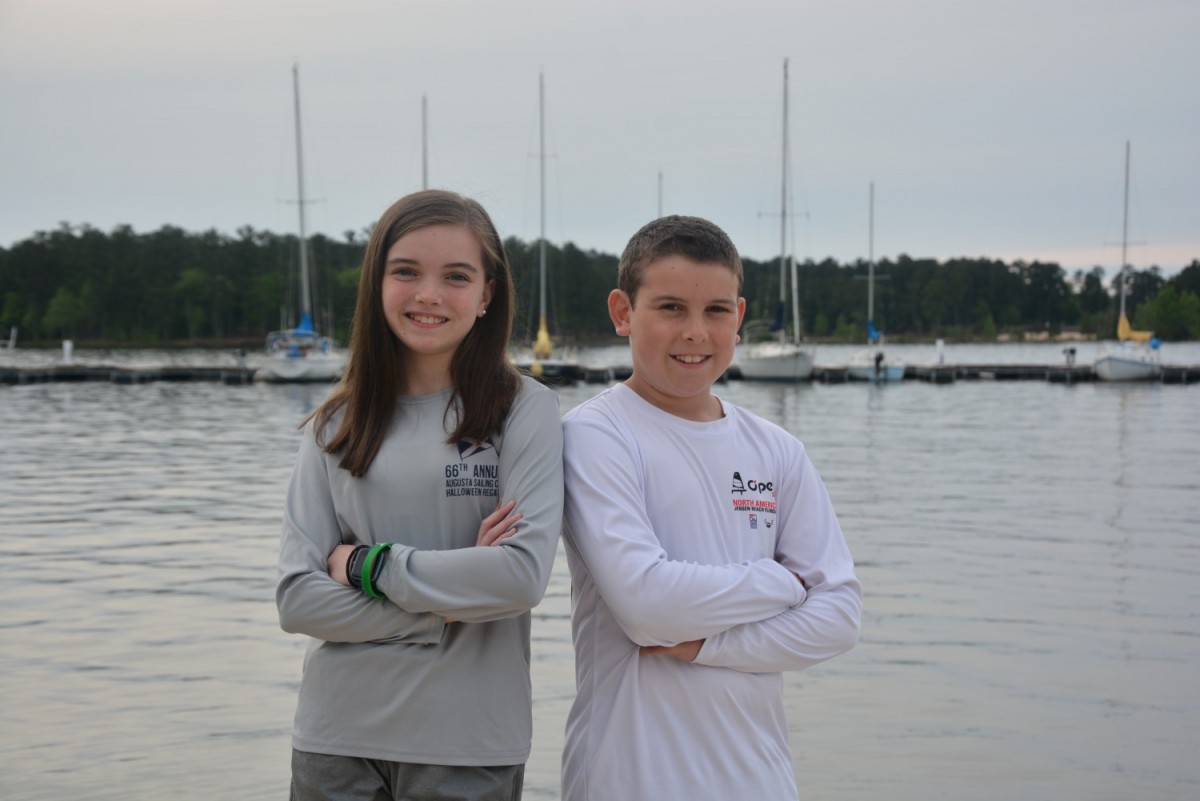 Katelyn and Grant Jr. Dietert, of Evans, pose for a photo at Clarks Hill Lake where the duo house their sailboats. The siblings seized an opportunity to enroll in a summer sailing camp two years ago through the Augusta Sailing Club and have grown to love the sport. Sailing is one of many activities they said they would not have thought to try if it wasn't for being part of the military family. (Laura Levering / Fort Gordon Public Affairs )

Frequent moves, painful “goodbyes,” extended separations from loved ones, and having to adapt to a new school or even culture are just a few of the challenges military children endure.

April is Month of the Military Child. It is a time to honor military youth for their strength and commitment through their sacrifices. While some military children find it difficult to see beyond the challenges, one Fort Gordon family has risen to the challenge – even welcoming them.

Katelyn, 12, and Grant Jr., 10, children of Capt. Grant Dietert Sr., U.S. Army Cyber Command, and Kristen Dietert, have found that having a parent in the military has opened up endless possibilities and adventures – beginning at water’s edge.

The Dietert family moved from Fort Drum, New York, to Fort Gordon in 2015. As New York natives, they were accustomed to a colder climate and did not spend much time on the water. After being in Georgia for a few years, Grant Sr. decided to enroll Katelyn and Grant in a summer camp at Augusta Sailing Club, a local nonprofit organization.

“We thought, ‘We didn’t have that in New York, so let’s try something new in Georgia,’ and they just loved it, and it escalated from there,” Kristen explained.

They enjoyed it so much that their father decided to give it a try, and it has since evolved into a family affair. Katelyn and Grant each have their own sailboat for recreation and competition purposes, and the family acquired a 22-foot Catalina sailboat.

“We spend a lot of time out here to just disconnect and enjoy the lake,” Kristen said, adding that Karen, their 4-year-old daughter, seems more interested in eating snacks on the boat than she is learning about sailing. But eventually she too will likely take on the sport.

“I think once she’s a little bit older, Katelyn will probably age up, and we’ll give Karen her boat,” Kristen said.

Until then, Katelyn and Grant actively sail and compete against each other – and other sailors – most often on Clarks Hill Lake, but also around the region. One of their most recent competitions took place in Florida where the siblings battled choppy waters and higher winds from the ocean – a major contrast from what they were accustomed to on the calm lake waters. Still, they rose to the challenge, did their best, and went home with new friends and sharpened sailing skills. It’s an experience Katelyn said she won’t soon forget. 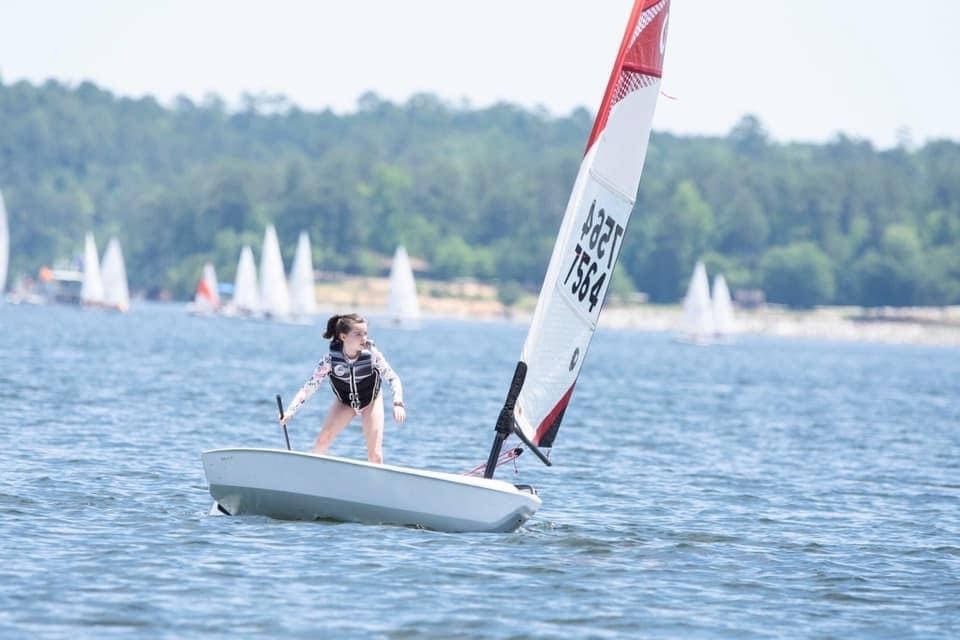 Katelyn Dietert, 12, sails on the waters of Clarks Hill Lake during the Augusta Sailing Club's Halloween Regatta in 2019. (Courtesy photo)

“I like that we have opportunities that some other families don’t get … and like if we want to visit a friend that’s down there, we can,” Katelyn said. “It’s a lot of fun,” Katelyn said.

Although competing accounts for a large portion of time spent sailing, Kristen said that unlike other sports they have participated in, sailing is one of the few where there is more emphasis on “community” than there is winning.

“It’s a huge community that has a competitive aspect kind of secondary, but the primary objective is for the kids to learn water safety [and] how to handle different water conditions,” Kristen said.

“When I’m out on my sailboat, I’m usually with a bunch of my friends, so we’ll just talk while we’re racing and while it’s competitive, it’s very fun and friendly,” Katelyn said.

Aware that there is a good possibility the family will face a permanent change of station in the future, Kristen said they plan to take what they’ve gained at Fort Gordon – newfound skillsets, sailboats, and fond memories – with them to their next duty station, wherever that may be. At the end of the day, she hopes that her children are able to look back and see how immensely fortunate they were to have been part of an extended family and organization that she said has “really opened up a world of unlimited possibilities for them.” 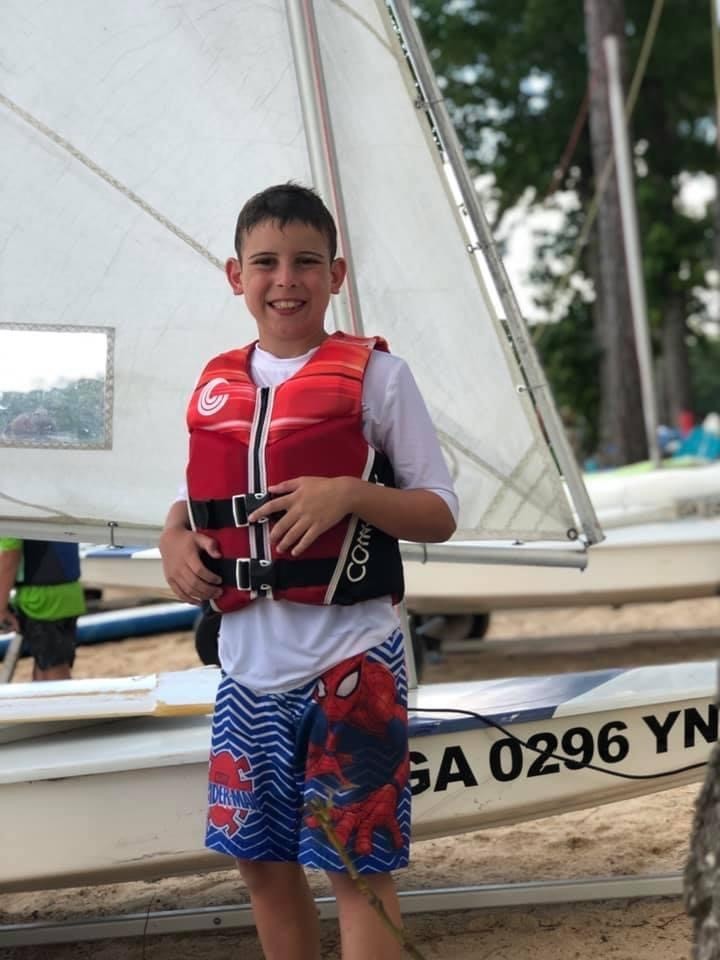 Grant Dietert Jr., 10, poses with his sailboat before an event hosted by the Augusta Sailing Club at Clarks Hill Lake. (Courtesy photo)

“The Army and sailing have taught my kids the importance of being able to ‘adjust their sails’ when things get windy and to ask for help in choppy waters,” Kristen said. “My wish for all three of my children is that they always know they are supported no matter what challenges they face in life.”