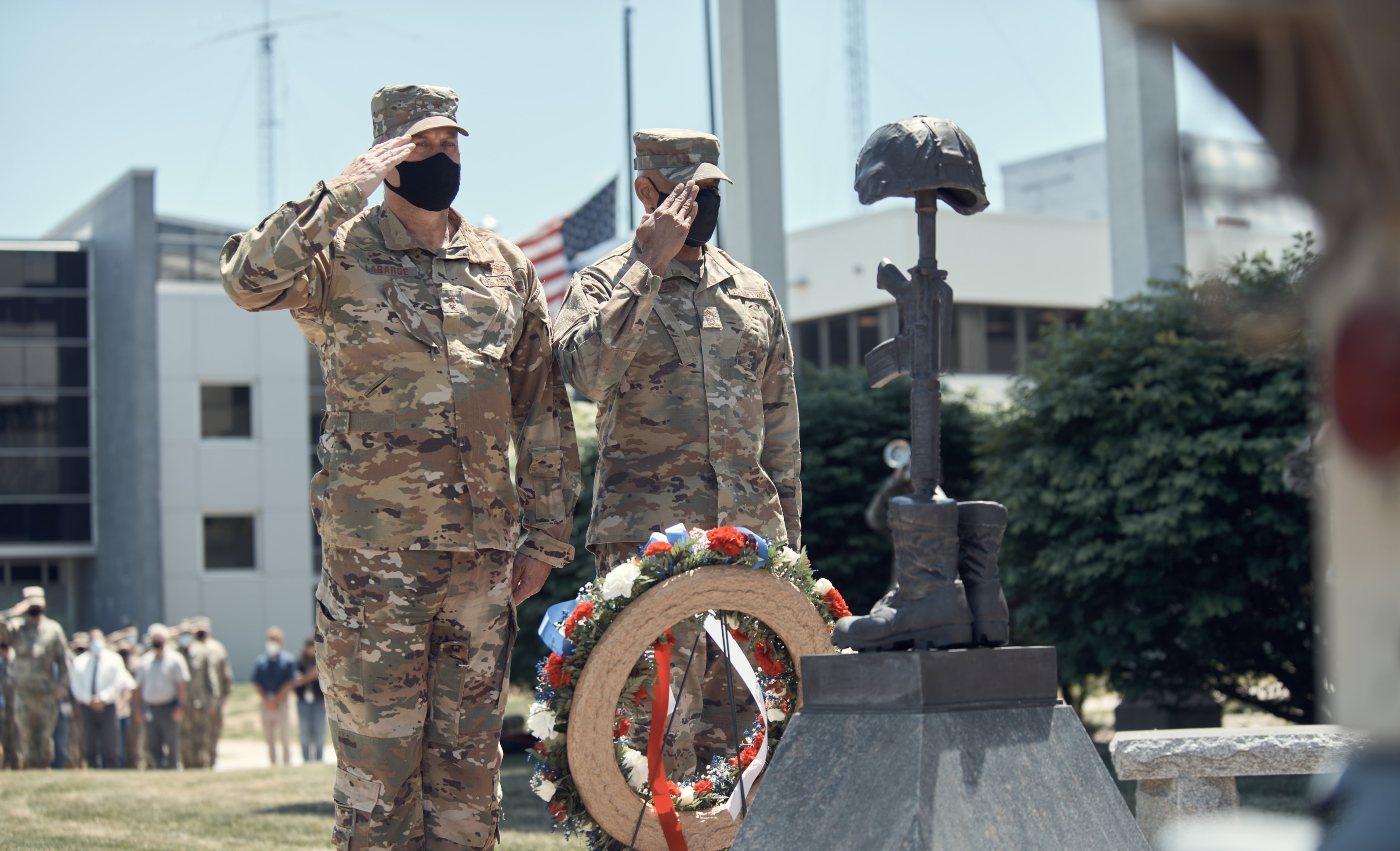 LATHAM, New York – The New York National Guard’s headquarters remembered 10 Soldiers and Airmen who died in the past year – on duty and off – during a short Memorial Day ceremony May 27.

The short ceremony, held outside the building, was videotaped so it could be viewed over Facebook and the New York National Guard YouTube channel.

LaBarge urged those attending the event to make time this weekend to remember those who made the ultimate sacrifice in combat.

He recently had a chance to make that time on Long Island a few weeks ago, Labarge told his listeners.

“As I was traveling the Long Island Expressway, I noticed a sign near Yaphank – a sign for the Staff Sgt. Louis Bonacasa Memorial Bridge. I knew Louis; he worked for me in the Base Defense Squadron at Stewart Air National Guard Base. He was killed in combat on 23 December 2015,” LaBarge said.

“That sign meant a lot to me. It gave me the opportunity to think about Lou and his family – to remember, even for a brief moment. I owe them at least that much,” he said.

On Memorial Day, he will travel to West Harrison to help dedicate a bridge to another Airman he knew: Tech Sgt. Joseph Lemm, who died alongside Bonacasa on that day in 2015.

Using the same words to his audience of Soldiers, Airmen, Sailors and civilian employees, LaBarge echoed the significance of that moment of remembrance.

“Monday will mean a lot to me as it will give me the opportunity to remember Joe and his family, even for a brief moment. I owe them that much,” he said.

Most military members who have not been in combat don’t know if they will flinch or rise to the occasion and become “unsuspecting warriors,” LaBarge said.

But Louis Bonacasa and Joseph Lemm and the other Soldiers, Sailors, Airmen, Marines and Coast Guardsmen honored on Memorial Day faced that question and got the answer, he said.

“When we consider their courage and sacrifice, that question has been answered for all time,” he emphasized.

Everybody who has ever served in the military undertook a contract when they took the oath, vowing to “faithfully discharge the duties of the office,” LaBarge said. The oath does not say “until the going gets tough.”

“The people that we memorialize today knew that distinction, and they did not hesitate to uphold their contract,” LaBarge said.