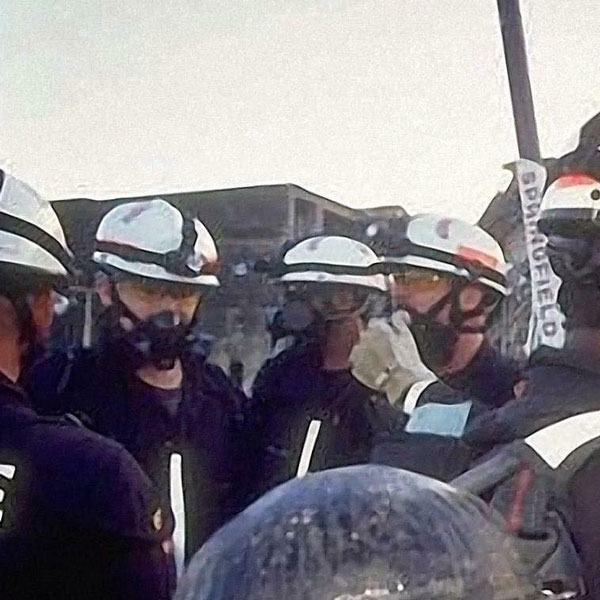 By Thomas Brading - September 2, 2021 − FORT BELVOIR, Va. — Two decades ago as the nation reeled from the terrorist attacks on Sept. 11, 2001, a unique team of search and rescue Soldiers put their training to work at the Pentagon when they were needed the most.

The effects of that Tuesday morning left a lasting legacy on the Army’s Military District of Washington Engineer Company. Years later, the unit was renamed the 911th Technical Rescue Engineer Company for its efforts that day.

As flames and black smoke billowed from the Pentagon, the team rushed to the disaster site without waiting on orders and spent 10 days engaged in search and rescue operations.

Soldiers from the 911th TREC come from a variety of backgrounds — combat engineers, firefighters, horizontal and vertical construction engineers and various support specialties — who receive training and certification as rescue technicians and mine rescuers.

The 911th TREC is the only technical rescue company in the Department of Defense and its Soldiers train for “the nation’s darkest day daily,” said Capt. Joseph Thomson, its commander.

On Interstate 395, a congested spur route connecting Virginia to Washington, D.C., Dewey Snavely was on terminal leave and adjusting to civilian life. The sergeant took a job at Sunbelt Rentals, a construction equipment rental company in Springfield, Virginia.

That morning he had already made a delivery to a nearby construction site and was heading to the next place on their schedule.

While driving, he listened to the radio as the situation unfolded in New York City, where a plane had struck the north tower of the World Trade Center. At first, many speculated the ways it could have been an accident.

But Snavely said he began to think the worst. His gut feeling was all but confirmed shortly after when a second jetliner struck the south tower.

Snavely asked his coworker, Dan, if driving into Washington, D.C., was the best idea, he said. Since the incident seemed limited to New York, his coworker believed it would be OK, so the pair continued their schedule.

Their next stop was on Shirlington Road in Arlington, roughly 3 miles from the Pentagon. That’s where they heard a low-flying plane soar overhead, Snavely said. Although hearing takeoffs and landings near the Reagan National Airport was common, it was never this loud.

Unbeknownst to Snavely, he heard American Airlines Flight 77 as the hijacked jetliner headed toward the Pentagon.

“We looked up, then kind of looked at each other,” he said. “[I thought,] ‘what the hell is that [pilot] doing?’ I’ll never forget the sound of the engines throttling back when they’re decelerating.”

Less than a minute later, Snavely heard AA 77 explode into the Pentagon’s western wall, killing everyone on board and 125 in the building. Black smoke filled the sky.

Snavely knew his terminal leave was over, and even if it wasn’t, he had a job to do.

Weeks before, Snavely had turned in all his Army gear, but he knew once the Pentagon was under attack it was time to turn around, head to Fort Belvoir and do what he was trained for, he said.

Around this time at Fort Belvoir, the rescue unit’s Soldiers were well into another training day.

“We [already] did all of our in-house training, from rope rescue to confined space to collapse structure, to shoring anything in that nature,” said Fred Brown, then a senior noncommissioned officer, who now works as a Fairfax County Government project manager.

It was just before 9 a.m. and Brown was preparing for his next training class when the news coverage from New York caught his eye.

A group of his Soldiers was on their way to a funeral service less than an hour away at Quantico. Brown called back the Soldiers, but with the incident occurring in New York his leadership insisted they continue.

That changed at 9:37 a.m. when five men affiliated with al-Qaeda deliberately flew AA 77 into the Pentagon, matching the tactic in New York. The unit would be tested for the first time.

Brown quickly called the squad back from Quantico and “got everything together,” he said. “We were prepared to move within an hour.”

An initial team flew by helicopter with a sling load of basic search and rescue equipment, but was asked to land because the last hijacked plane was still in the sky, Brown said.

So, the team pre-staged at Fort McNair in Washington, D.C. At Fort Belvoir, roughly 30 minutes south, more Soldiers loaded equipment into Humvees intended to rescue lives, said Snavely, who met with Brown on the ground.

Brown and Snavely left Fort Belvoir by Humvee before the main body to access the George Washington Parkway and met with the advanced team at Fort McNair.

When the unit arrived at the Pentagon, “there was a bit of chaos,” Brown said, adding that the incident commander expected them. The bulk of their unit arrived shortly after and they were joined by local, state and federal responders.

“While waiting on the main body [of the unit] to show up, we took the first squad into the building to do an initial search and rescue,” Brown said. “This was after everybody that was going to come out, could come out.”

As the fires blazed, it was still unclear how bad things were inside the building. But according to Brown, that was when their training kicked in. The untested unit was ready for the challenge.

“I didn’t think of anything except making sure that my guys were suited up correctly,” he said. “We were supplied with air apparatuses, and we went in and did the search.”

As horrific as the scene was, it was personal for Brown on another level.

“My mother-in-law was in the building somewhere,” he said. But “I didn’t know exactly where she was in relationship to the plane or where the plane went in.”

“Sgt. Brown and I looked at where the plane hit, and relatively knowing where she worked,” Snavely said. “Nobody [had] heard from her, but her car was still in the parking lot.

“The plane hit and went right through her office. She was in the Army's Budget Analyst’s Office. I got ahold of my father-in-law and he told me what room she was in. I had to notify him that if he hadn’t heard from her, she probably wasn’t alive anymore.”

Later, it was confirmed that Brown’s mother-in-law was killed. He would eventually locate her, although only “90% sure it was her,” he said, after his team spotted her personal effects, like her purse and government identification card.

“It was a living hell,” Snavely said. “When we first went in, there had been water sprayed on the building for so long, there was so much water in between the corridors, walkways had filled up with water.”

The water had nowhere to drain. Debris was everywhere, including parts of the plane, building and victims.

“Whenever we found human remains, we informed the [Federal Bureau of Investigation] because, by now, it is a known terrorist attack,” Snavely said, adding the FBI required them to mark where they spotted causalities to help identify them.

Snavely vividly remembers finding three Army officers, all face down, in an inner corridor. All three were intact, but appeared to have died instantly. He checked their wallets to identify them, then notified the FBI, he said. It would be the largest investigation in the bureau’s history.

From “the best that I can remember, everybody that we found died in the impact,” Snavely said. Although news footage would replay images of personnel running out of the building, they were all out by the time the Soldiers entered the building.

The recovery site was not like the others the unit trained for, such as responding to a natural disaster.

The heavy loss of life weighed on the Soldiers, who “were feeling a lot of disappointment,” Brown said, especially given how hard they trained to save lives. The Soldiers faced the realization they probably would not find anybody alive.

This was stressful for a unit that trains to rescue, Brown said. As the body count rose, it became more and more challenging to stay motivated.

“[We’re] search and recovery, but we switched into recovery mode only,” Brown said. “We just dealt with it. Many of the young Soldiers were recovering unrecognizable bodies, often unable to decipher burnt insulation from the flesh.

However difficult the following days would be, one silver lining that always stuck with Snavely and Brown was how well trained the unit was, they said.

“We had a mission to do, we had a job to do and we went forward and we executed that job,” he said. Even though “I was on terminal leave, I couldn’t imagine not being there.”

According to Brown, the unit’s challenging, realistic training is why nobody from their team was hurt during the dangerous response effort.

“Everyone functioned as they should have,” Brown said, and “a lot of them continued in the military.”

Heading into the Pentagon mission, “we were an untested unit,” he added. “This unit was never in this situation before. Nobody knew exactly what we would face.”

In all, nearly 3,000 people died that morning in New York, Arlington and Pennsylvania. Decades later, the unit still maintains a high level of training and stands ready to be called on again.

Today’s search and rescue Soldiers maintain readiness by aligning their training needs around their technical rescue disciplines, the captain added.

“It’s an honor to serve as the commander of the 911th, especially on the 20th anniversary of Sept. 11, 2001,” Thomson said. “This organization has deep roots and traditions that we always look to honor and uphold.”

In 2006, the unit was redesignated as the 911th to commemorate their recovery efforts at the Pentagon.

Since the attack, “the unit has grown by leaps and bounds,” Brown said. “They’ve gained equipment that we only dreamed of. It’s amazing to see how far they’ve come.”

Those leaps and bounds are a direct reflection of how they performed, he said.

“The biggest thing that I’m proud of is how well our training paid off,” Brown said, regarding the Pentagon mission. “The Soldiers that went in there performed their duty, and they did it well.”