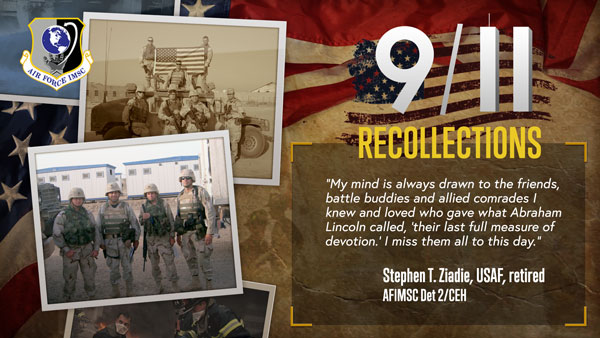 By Stephen T. Ziadie − August 31, 2021
JOINT BASE PEARL HARBOR-HICKAM, Hawaii – I took delivery of my overseas household goods shipment Sept. 10, 2001. The next day, Sept. 11, was my first full day in the office at my new assignment at Seymour Johnson AFB, North Carolina.

It was also our squadron physical training day. We completed a grueling round of strength exercises capped off with a two-mile run and the two-minute shower, change into battle dress uniforms, and then back to the squadron drill.

I barely entered the civil engineer squadron customer service section doors when I noticed my administrative assistant staring up frozenly at the television screen used to monitor hurricanes and display work order metrics.

“Something happened,” she said. “I’m not sure what.”

Adjoining the customer service center was my office and my deputy’s office, linked together by a small conference room filled with radios, status boards and computers that doubled as our unit control center. Inside the UCC, the room was packed full with our operations flight brothers and sisters, watching the large television screen showing a news broadcast of one of the World Trade Center towers on fire.

The only sound was the incoherent blathering of a news reporter trying to imitate that he knew what was happening. A few minutes later, we watched a jet passenger aircraft slam into the second tower.

This was no natural disaster.

One aircraft crashing into a building might be an accident. Two pointed to something more sinister. We also saw video feeds of another airplane crash at the Pentagon, and a fourth in a field in western Pennsylvania. The rest of the day was filled with emergency battle staff meetings and endless speculation on the future.

Fast forward to two weeks before Christmas. My boss, along with most of the squadron, boarded an airplane for Kyrgyzstan. Weeks earlier, he called me into his office and said, “I need you to take care of them all and keep the mission running. You’ll do fine. We’ll be back in six months.”

It was closer to a year before they returned. When the squadron did return, I took a small advanced echelon team out to scout two potential beddown locations at Camp Victory, Kuwait, and a small, sleepy hollow, Air National Guard-run Operation Southern Watch KC-135 continuous rotation site called Al Udeid Air Base, Qatar.

We ended up at Al Udeid for 2002-2003 and it was my first squadron command. But that’s another story. In the years to follow, I deployed to Iraq, Afghanistan, and a few other places in between, all in support of our homeland.

In his classic novel “Tale of Two Cities,” Charles Dickens opens the first chapter with the famous line:

These words echoed with incredible accuracy in the years following 9/11. Looking back over those post-9/11 years I spent in uniform, my mind is always drawn to the friends, battle buddies and allied comrades I knew and loved who gave, what Abraham Lincoln called, “their last full measure of devotion.”

I miss them all to this day.

I also miss the wide outpouring of national solidarity that was so prevalent in those years following 9/11. That appears so absent now. I additionally wonder if our country, our military and our citizens today fully and completely understand the significance of how much our freedoms cost in blood and human sufferings, along with what lessons should be retained from 9/11 and what revisionist lies should be jettisoned as pure chaff.

I was honored to serve in uniform during those years. I lost a lot, but others lost more. Yet what I gained was something very few may understand or care to understand. What I’m talking about is most eloquently inscribed on the U.S. Vietnam Veterans Memorial: “You’ve never truly lived until you’ve almost died. For those who have to fight for it, freedom has a flavor the protected will never know.”