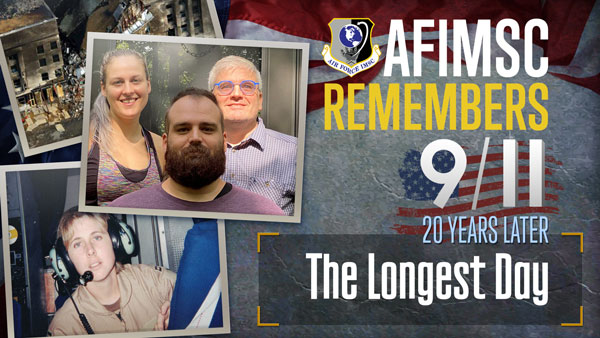 By Stephen T. Ziadie - August 31, 2021
JOINT BASE SAN ANTONIO-LACKLAND, Texas – For years after the Sept. 11, 2001, terrorist attacks, Linda Alcala wouldn’t use the restroom at the Pentagon without formulating a plan.

“What should I do if the alarm goes off? Where’s the nearest exit? How quickly can I get to my gas mask?” she would ask herself.

In 2001, Alcala was an accounting office manager at Bolling Air Force Base in Washington, D.C. She was printing reports ahead of her scheduled meeting at the Pentagon the morning of Sept. 11. A paper jam delayed her enough that she missed her bus to the meeting.

Had she been a passenger on the bus, she would have been dropped off minutes before flight 77 crashed into the west side of the Pentagon near the escalator to her fourth-floor meeting.

After the plane hit the Pentagon, Alcala spent the next several hours sheltered in a bathroom, desperately trying to reach her son and other family members to let them know she was safe at Bolling, and not at the Pentagon.

Today, Alcala is the Financial Services Division chief for the Air Force Installation and Mission Support Center at JBSA-Lackland. Reflecting on that day two decades later, she recalls the moment everything hit home for her.

"I could see the smoke; I could smell the fuel. It just kind of really hit home,” she said.

That same morning, after the second World Trade Center tower was struck in New York City, Kirk Phillips opted to stick around the Air Space and Range Office in Crystal City, Virginia, instead of heading to his meeting at the Army Range Office in the Pentagon. His boss had just been given air space control for the entire country, and Phillips felt compelled to help with the multi-agency effort to ground all airborne traffic.

Phillips, now the director for AFIMSC’s Office of Energy Assurance, seldom spoke of his life-altering decision that morning until recently.

“My decision to not go to my meeting that morning meant I wasn’t in the Army’s Range Office, which was immediately above where the plane hit,” he said. “Many people lost their lives in that office, and it hit when I was supposed to be there. So, I felt incredibly blessed to have not been there, but I also lost a number of friends.”

When he finally left the office, Phillips’ only way out of the city was on foot.

As Phillips’ long day was winding down, Dr. Kirsten Hawley was at Tinker Air Force Base, Oklahoma, gearing up to provide airborne warning and control over Washington, D.C.

Hawley, an E-3 Sentry navigator, had just reported to work when she first learned of the attacks.

“As I walked into the building on the morning of September 11th, our squadron commander, deputy commander and director of operations were running down the hallway to the one television set we had in the squadron and no one quite understood what was happening,” she said.

Hawley and her fellow squadron members were called together and briefed on the unfolding situation and then ordered to return home to begin mandatory crew rest ahead of their midnight assignment.

“The initial shock was watching the leaders running down the hallway — that stayed with me,” she said. “And then when they sent us home it was extremely difficult to truly rest.”

Hawley, who is now a source selection advisor and procurement analyst with the Air Force Installation Contracting Center’s Acquisition Center of Excellence, can vividly recall the sights and sounds she experienced during the mission that night.

“Typically, the radio chatter is overwhelming, but it was silent,” she said. “The only voices on the radio were the military aircraft and air traffic controllers during the entire mission.”

When the crew members arrived at their orbit location, they could see the fires at the Pentagon.

“It was extremely eerie,” she said.

Immediately after the attacks, Hawley experienced a rapid shift in her deployment schedule.

“For the first time, the deployments moved from being overseas to being home missions,” Hawley said. “It was the first time we were doing missions from home with such intensity. It was exhausting.”

Looking back, she describes the experience of 9/11 as an overwhelming feeling of loss.

“We just lost so many people so quickly. It was just a heartfelt loss, and there was nothing you could do,” she said.

One year after the attacks, Phillips was invited to attend the Pentagon’s first memorial ceremony. He did not attend.

“I couldn’t deal with the loss. It was too early for me,” he said.

He spent the next 10 years trying not to think about that day, and has recently begun to allow himself to reflect and share his experiences.

While 9/11 took much from Phillips, one thing it couldn’t take was his desire to live a life of service and help others — the very quality that prevented him from leaving his Crystal City office two decades ago.

“I’ve always been about service to others, not only in my work, but also my personal life,” he said. “I try to live out that ideal because I think that’s what makes my life, and others’ lives, richer. Kiss your spouse and family members goodbye regularly and try to live each day to the fullest.”