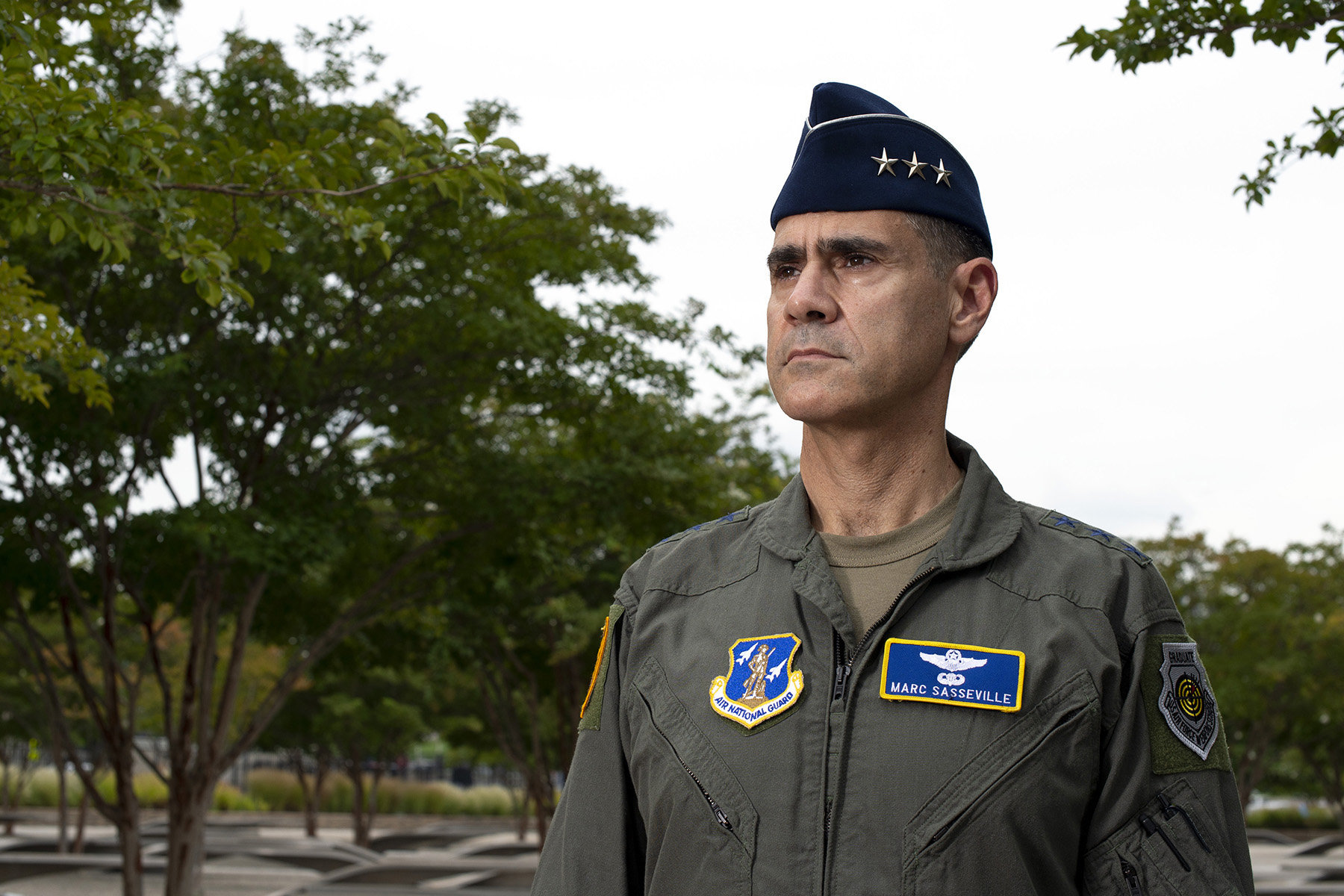 Two decades ago, Air Force Lt. Gen. Marc H. Sasseville, now the vice chief of the National Guard Bureau, was a lieutenant colonel with the D.C. Air National Guard. When aircraft hit the World Trade Center towers in New York City and the Pentagon in Washington, the nation went on alert — and so did he.

"As a military pilot, I had a couple thoughts," he said. "Short term, [we] need to get in the air — we're under attack. All I could think about was Pearl Harbor, to December 7, 1941, and showing some kind of ability to respond. We didn't know what was behind these initial hits on America. There could have been multiple waves."

He also realized that something big had happened — a game-changing event for the United States that would alter its course for a long time.

By the time Sasseville and fellow F-16 pilot Heather R. Penney — then a first lieutenant — got into the cockpits of their F-16 aircraft at Andrews Air Force Base, they already knew that hijacked aircraft had hit the Pentagon and the towers in New York. Their mission was to prevent further damage — in particular from that posed by United Airlines Flight 93.

When Sasseville and Penney left Andrews, their aircraft launched without any missiles on board. They had embarked on what amounted to a suicide mission. Without missiles, the two pilots were prepared to ram their own aircraft into Flight 93 in order to keep it from causing any damage to the nation’s capital.

Flight 93 was originally supposed to go from Newark International Airport in New Jersey to San Francisco International in California. Just 45 minutes into that domestic flight, hijackers took control of the plane and redirected it toward Washington. The goal of the hijackers still remains unknown, perhaps it was to crash the plane into either the U.S. Capitol Building or the White House. Sasseville and Penney were supposed to prevent something like that from happening.

"We had gotten a call from the White House Joint Operations Center, and they could see the picture," Sasseville said. "They knew that Flight 93 had turned back. And they had basically asked if we had any airplanes that could go up the river."

It made perfect sense what they were being asked to do, Sasseville said. The hijackers might not be able to fly by instruments and get the aircraft where they wanted it. But if they looked at the ground — at the Potomac River — they could use that as a guide to get them where they wanted to be.

"You call them geographic references," Sasseville said. "Flying down a river, flying down a highway or a power line is a great way to help guide you to a certain point. That's what it looked like on the radar scope, that there was an airplane flying down the river."

Resistance from passengers aboard Flight 93 eventually thwarted the hijackers' plans; and ultimately, the plane crashed into a field near Shanksville, Pennsylvania, about 130 miles northwest of Washington. All of that happened before Sasseville and Penney even got into the air — though they didn't know it at the time.

While neither pilot saw Flight 93 on that mission, they did see the results of American Airlines Flight 77 — which had crashed into the Pentagon.

"The piece that I remember most was being at 6,000 feet, right there, smelling the fumes from the fire and looking down and seeing chaos, and just feeling sick to my stomach," Sasseville said. "I wasn't sick because of the fumes. I was sick because I knew that we had been attacked."

Sasseville said the United States had been attacked that day because it failed to see such a thing coming. He called it a "failure of imagination." The United States must ready itself for another attack, he said, because America's enemies will try again.

"The next one won't be like this one was, but there will be another attack. There are still people out there that do not want us to have the liberties and freedoms that we enjoy today," he said. "We need to thoroughly examine our vulnerabilities and our weaknesses ... and we need to shore up those vulnerabilities and expect the unexpected and not be surprised by it."

On the morning of Sept. 11, 2001, Sasseville had been attending meetings at the 113th Wing, part of the D.C. National Guard. His unit had just come back from a training deployment, and manning was low.

"[It was a] skeleton crew because those same guardsmen ... go back to their normal jobs," he said. "We typically don't see them for a while. And so what we had there that day was a skeleton crew of the full-time operators and maintainers and logistics and support people inside the wing."

After the terrorist attacks, he said, things changed dramatically at the unit.

"It was an entire wing effort that really started to swing into motion," he said. "We started refueling airplanes, loading up airplanes with weapons, assembling the weapons, and we just got into [being like] a machine that went out and collected our part-timers that had gone back to their employers, to bring them back to begin to set alert, because we knew we were going to need a lot more help and this was going to go on for some time."

One big change for the 113th Wing at Andrews was that it became part of Operation Noble Eagle, part of which is to protect the skies over the Nation's Capital.

Following the Sept. 11 terrorist attacks, the 113th Wing changed in another big way as well — along with the rest of the National Guard. It grew and developed in importance and how it can be used to carry out the defense of the nation.

"We have this duality of mission where we go to fight the nation's wars, and we support our communities back home," Sasseville said. "These two decades-plus have really reinforced the professionalization and the operationalization of the National Guard to make us the most ready we have probably ever been in our history."

After 20 years of growth and development through participation in and planning of combat operations in Iraq and Afghanistan, that growth is something Sasseville said he hopes the National Guard will never lose.

"We need to be incorporated in all the training, and we need to be used as part of the joint force, so that we don't lose that investment, that muscle memory," he said. "I know that there's plenty of desire for, on the part of our guardsmen, to continue to serve in that capacity."