CHINA IS SEEKING NAVAL BASE IN WEST AFRICA 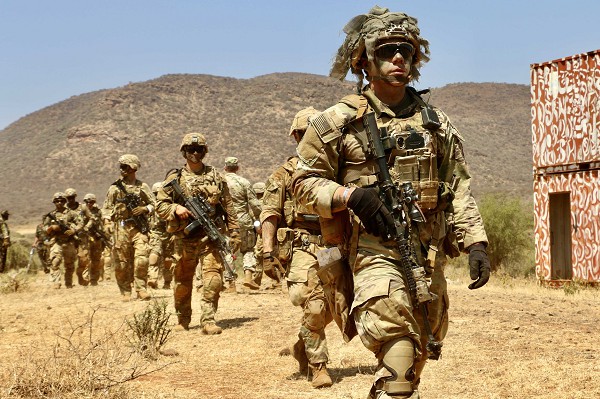 U.S., March 17, 2022 - The Chinese are activity seeking a military naval base in Africa on the Atlantic coast, which would threaten U.S. national security, Army Gen. Stephen J. Townsend, commander of U.S. Africa Command said.  The photo shows U.S. soldiers from 1st Battalion, 503rd Infantry Regiment, 173rd Airborne Brigade, gather on the objective site after executing a bilateral exercise with Kenyan soldiers in Kenya during Exercise Justified Accord, March 14, 2022. Photo by Army Capt. Abigail Hammock.  Townsend and other Defense Department officials testified today at a House Armed Services Committee hearing on national security challenges and U.S. military activities in the Middle East and Africa.   "The thing I think I'm most worried about is this military base on the Atlantic coast, and where they have the most traction for that today is in Equatorial Guinea," Townsend said.  They've also been seeking other ports on the West Africa coastline, but they've made the most progress in Equatorial Guinea, he said.  In response, the U.S. has recently sent an interagency delegation to that country to discuss U.S. security concerns, he said.  "As a first priority, we need to prevent or deter a Chinese space on the Atlantic coast of Africa," he said, mentioning that he would discuss with lawmakers more details of those national security concerns in closed session.

Elsewhere in Africa, China holds a large percentage of foreign debt and also has extended leases on critical infrastructure, including ports and airports, he said.  Russia also has nefarious designs in Africa, one of which is through its private security company called the Wagner Group, he said.   Two soldiers hold weapons as they squat next to one another in a narrow space. Behind them, two soldiers hold weapons.  The Wagner Group offers governments the ability to conduct counterinsurgency and counterterrorism operations unconstrained by human rights responsibilities.  "Wagner obeys no rules. They won't follow the direction of the government. They won't partner more effectively," he said.  A battle between democracy and authoritarianism is raging across Africa, the general said.

"In Africa, a few troops and a few bucks still go a long way. Modest and predictable resourcing yields outsized returns for U.S. and African security."  Africom receives just 0.3% of the DOD operating budget and manpower, he said. "Modest investments today can yield a continent of partners tomorrow. We are most effective when we synchronize diplomacy, development and defense."  Marine Corps Gen. Kenneth F. McKenzie Jr., commander of U.S. Central Command, named Iran as the No. 1 threat to the region with China, Russia and terrorist groups also vying for influence and power.  "Iran is no less of a threat to U.S. interests, or the stability of the region than it was in 1979. To the contrary, the threat posed by Iran is graver than ever," McKenzie said.

McKenzie described the increased threat from Iran in terms of proxies and clients in the region, most notably Yemen, but also other nations and groups.  Also, the Iranians have made vast improvements in their ballistic missile, land-attack cruise missile and small unmanned aerial vehicle platforms in terms of number, accuracy and ability to fly in relatively undetected ways.  Sasha Baker, deputy undersecretary of defense for policy, testified that the department seeks to limit Russian and Chinese influence in Africa and the Middle East through sustained engagement, demonstrating the superiority of the United States as a partner of choice.

"In the Middle East and Africa, the department builds partnership through an approach that draws on all of our tools to include security cooperation, exercises, defense, diplomacy and force posture," she said.  The department's priorities in the Middle East are to defend against Iranian backed threats and to counter violent extremist organizations, in cooperation with partners, she said.  In Africa, DOD is focused on interagency and multilateral efforts to stabilize the region, she said.  Content by David Vergun, DOD