HISTORY, TRADITION AT THE SOUND OF THE BEAT 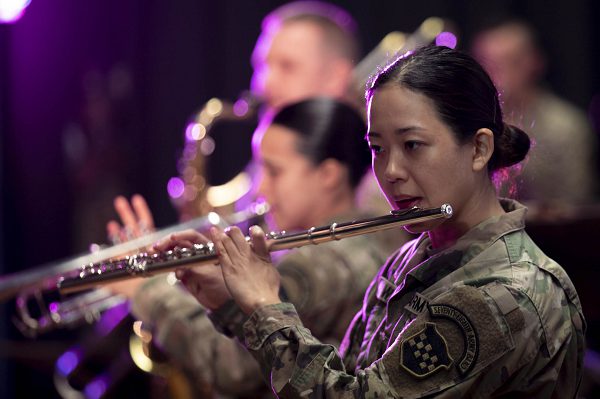 The first recorded performance of a military band in America occurred in 1756 when fife players and drummers marched alongside the 1,000 strong Regimental Artillery Company of Philadelphia commanded by Colonel Benjamin Franklin.*

(* Yes, THAT Ben Franklin. In a strange historical twist, this founder of our nation was in his fifties, both rich and famous for his inventions, yet volunteered to lead troops during the French and Indian Wars (1754-1763).  Although he lacked any military experience, Colonel Franklin became the highest ranked American military commander at the time. (Source: Smithsonian Institution Magazine article by Brooke C. Stoddard, October 7, 2010).

Some might question the need for soldiers to serve as musicians in military bands as a waste of taxpayer money.

If we consult history, however, the value and purpose of military orchestras becomes abundantly clear.

The earliest historical record of military bands was in the 13th Century when they accompanied soldiers of the Ottoman Empire as they conquered North Africa. During America’s first taste of combat, colonial  troops were summoned to arms by the bugle call and marched into battle to the sounds of the fife and drum. During the Civil War, both sides used soldier musicians to build morale, inspire the troops and to serve as a rallying cry during battle.

In WWI, General “Blackjack” Pershing recognized the value of military musicians to instill esprit de corps among his troops and pressed Congress to establish the first Army Band School at Chaumont, France.

(Interesting Note: According to the College Music Symposium, 28 Army musicians were awarded the Congressional Medal of Honor. (Source: Union Musicians and the Medal of Honor During the American Civil War by James A. Davis, 2014.)

Just as our military musicians do their part to boost troop morale, you can add your “yellow ribbon” support by donating to Support Our Troops.org and our many programs for deployed service members around the world.