WHEN WEATHER IS YOUR BEST FRIEND… OR WORST ENEMY 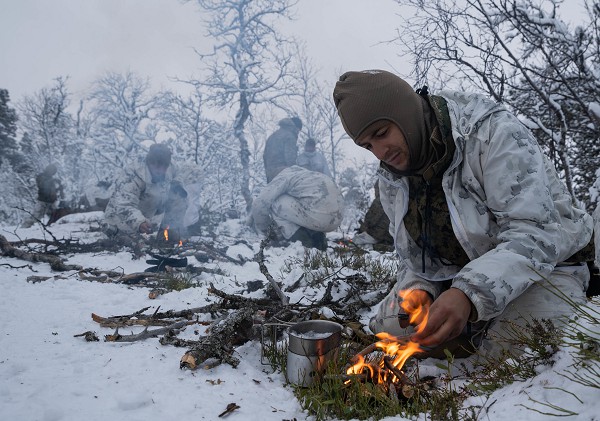 Tolga, Norway. (October 5, 2022): In this photo by Marine Sergeant Robin Lewis, U.S. Marines with the 2nd Marine Expeditionary Force boil snow for drinking water while participating in training to increase familiarity with and proficiency operating in Arctic conditions alongside our allies and partners. Throughout history, weather has proven to be both friend and foe to military forces, often determining the outcome of the battle.

Tolga, Norway. (October 5, 2022):  Sometimes the weather can be your friend, a sudden ally that appears just in time to save you and your unit from disaster.  Other times, old man weather brings calamity, death, and destruction on a biblical scale.

Twice, the Mongol leader Kublai Khan (the son of Genghis Khan) attempted to expand his empire by invading the island of Japan, and twice his massive fleets of ships ended up on the bottom of the ocean. The Khan’s plan was to attack the Japanese city of Kyushu from the sea, and he had assembled the largest armada the world had ever seen, staffed by over 140,000 sailors. Both times his invasion plans were dashed by sudden, typhoon strength winds that destroyed his ships, ending his plans to expand his empire. Legend has it that the Japanese Emperor, himself a “living god” to his people, summoned these “divine winds” or Kamikaze to destroy the Mongol enemy. Unfortunately, American pilots would later encounter fanatical Japanese pilots willing to commit suicide in the name of their Emperor… called Kamikazes.

Sometimes, weather can be a lifesaver.

In August 1776 during the Battle of Long Island, General George Washington found himself surrounded by 20,000 British soldiers and German mercenaries. His only chance for escape was by sea right under the enemy’s nose. According to Dr. Mary Stockwell of Mount Vernon.org, Washington loaded his 9,000 surviving continentals into boats under the cover of darkness with complete noise discipline (he even ordered the boat oars covered in cloth to muffle their sound). Just as daylight broke revealing his position, Washington watched in awe as a dense fog miraculously descended, shielding his forces from view, and enabling their escape.

History records George Washington was the last to leave.

The strangest example of weather “doing the fighting for us” occurred when the British burned America’s capitol during the War of 1812. The Brits were in a foul mood when they managed to capture Washington and they decided, rather than occupy the town, to burn it to the ground. They set fire to the Congress, the Supreme Court, and the Library of Congress. They then set the White House ablaze and fully intended to torch the rest of Washington until a savior arrived in the form of extreme weather.

A freak thunderstorm with hurricane force winds swept through the still smoldering Capitol causing buildings to collapse on the hapless enemy, killing several soldiers. As the British tried to regroup in the storm, a tornado touched down on Constitution Avenue hurling huge chunks of debris, even artillery pieces, into the air killing even more enemy soldiers and sending the rest fleeing to their damaged ships. Upon his departure, a British admiral is reported to have said to a Washingtonian, “Great God, is this the kind of storm to which you are accustomed in this infernal country?” (Credit: Author Gillian Brockell, the Singeing of Washington).

As Americans, we must not be fair weather friends to our active-duty service members deployed around the world. As you read about these brave men and women deployed overseas, please consider showing your support by contributing funds to Support Our Troops’ Patriot Brigade®. Here you will join thousands of patriots who make monthly donations to pay for comfort items and recreational programs for our military deployed overseas. Please go to our secure website https://supportourtroops.org/donate to contribute to America’s finest today!