“THOSE WHO CANNOT REMEMBER THE PAST ARE CONDEMNED TO REPEAT IT.” 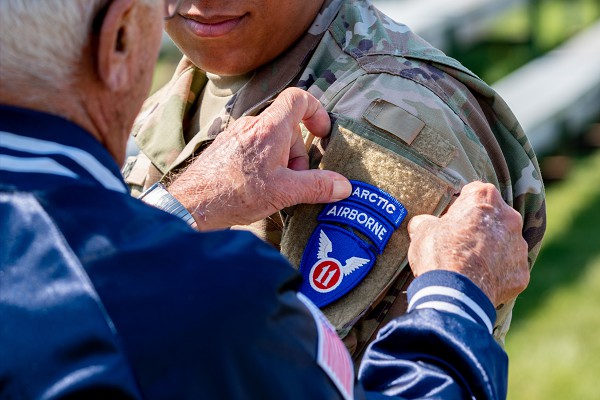 Joint Base Elmendorf-Richardson: (October 5, 2020): In this photo by Senior Airman Patrick Sullivan, Wayne Porter, a U.S. Army veteran who was assigned to the original 11th Airborne Division before its deactivation in 1958, places an 11th Airborne Division shoulder patch on Specialist Jihad Yarber. The presentation was part of a reactivation ceremony for the Army’s newest version of the 11th Airborne that will focus operations on extremely wintry weather and mountainous terrain.

Joint Base Elmendorf-Richardson: (October 5, 2020): Sometimes, they never learn. In 1812, French Emperor Napoleon Bonaparte invaded Russia with his Grande Armée that featured more than 500,000 soldiers and staff, the largest European military force ever assembled.

During the opening months, the invasion went well despite the scorched earth tactics of the Russian Army who burned everything as it retreated deeper and deeper into Russia. Napoleon arrived in Moscow hoping to find supplies and a comfortable resting place for his army for the winter as he awaited a Russian surrender that never came. As the brutal Russian winter set in, Russian patriots burned Moscow forcing Napoleon to retreat with his starving army without proper freezing weather clothing. Throughout the catastrophic retreat, Napoleon’s army was stalked by hunger, extreme cold, and a suddenly aggressive Russian Army who mercilessly harassed the defeated Frenchmen.

When Napoleon at last reach home, his army had lost over 400,000 men in the disastrous invasion that would soon lead to his ultimate defeat at Waterloo.

One would think any student of history would have dissuaded Adolf Hitler 130 years later to not make the same mistake.

Hitler launched Operation Barbarossa in 1941 with much the same arrogance as Napoleon, believing the operation would be short and therefore there would be no need for wintry weather gear. Just as happened to Napoleon, Hitlers forces found initial success pushing the Russian Army back to the outskirts of Moscow. The Russians were down to 90,000 men and victory appeared in sight until the rains came.

Autumn downpours turned dirt roads into rivers of mud that sank German trucks and armor up to their axels. It was “Rasputitsa” or the “quagmire season” where wheeled vehicles and horse drawn carts were hopelessly stuck, forcing the Germans to halt combat operations. Next came the bitter cold of the Russian winter with temperatures dropping to 40 degrees below zero. Men froze in their foxholes and the famed Luftwaffe was unable to provide air support. In the end, the Germans suffered over 750,000 injuries, many from the cold, and 200,000 deaths.

Ironically, extreme weather was responsible for saving both the Russians and the world from conquering despots. Rest assured, Americans understand this history and are determined not to make these same errors.

That is why the U.S. Army has reactivated the 11th Airborne Division stationed in Alaska to fight in extreme weather and in mountainous conditions. The new unit will train “like they will fight” in temperatures as low as 50 degrees below zero. These airborne troopers will have specially equipped vehicles to adapt to these conditions and are issued a variety of protective gear to allow them to continue to operate despite the cold.

Incredibly, the Army reports that this new unit is their most requested duty station.

As you read about these brave men and women, please consider showing your support by contributing funds to Support Our Troops’ Patriot Brigade®. Here you will join thousands of patriots who make monthly donations to pay for comfort items and recreational programs for our military deployed overseas. Please go to our secure website https://supportourtroops.org/donate to contribute to America’s finest today!