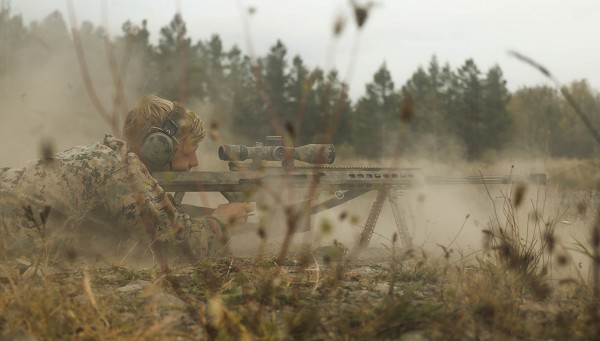 Sniper teams field the M107 Special Application Scoped Rifle (pictured above) and the highly destructive M107 .50 caliber rifle to take out heavily armored targets. Most units establish designated shooter/spotter teams, one locating the target using sophisticated vision and laser equipment while the shooter sends the round down range. These teams specialize in night operations using vision scopes to locate targets in sheer darkness. Sniper teams act as reconnaissance scouts for Marine infantry units becoming the eyes and ears of field commanders. In combat, Marine Scout Snipers are “force multipliers” in that one team can stall or disrupt a much larger enemy force.

Imagine the dedication it takes to become a Marine Scout Sniper and then consider pledging your support for America’s finest by contributing funds to Support Our Troops Patriot Brigade®. Here you will join thousands of patriots who make monthly donations to pay for comfort items and recreational programs for our military deployed overseas. Please go to our secure website https://supportourtroops.org/donate to contribute to America’s finest today!