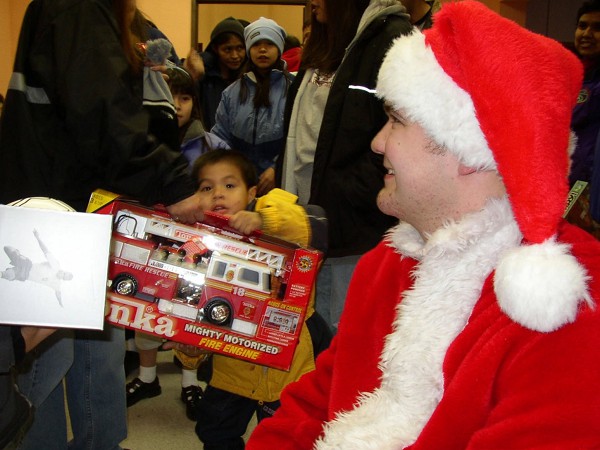 Juneau, Alaska (December 23, 2021): In this photo by Lieutenant Junior Grade Rebecca Chambers, Coast Guard Petty Officer Clinton P. Mooers (aka Santa) is all smiles after handing out Christmas gifts to children in Angoon recently. Mooers is a crewman aboard the Auke Bay-based cutter Liberty who participated in this year’s annual food, blanket, and toy drive in Southeast Alaska. The Auke are an Alaskan Native people, whose autonym Aakʼw Ḵwáan means "Small Lake People”, and they are a subgroup of the Tlingit tribe.

Juneau, Alaska (December 23, 2021): To commercial ships at sea, they are lifesavers. To drug smugglers, they are a nightmare. But to little kids in the remote regions of Alaska, they are a symbol of giving and Christmas joy. They are the U.S. Coast Guard, and they are all these things and more.

What is truly touching is seeing these servicemembers take time to make the holidays joyful for others while they are far from home serving their country. Since February, the U.S. Military has deployed over 20,000 additional forces to Europe in response to the Ukraine crisis. That means over 100,000 American Army, Air Force, Naval, and Marine Forces are standing ready to defend democracy and freedom from the world’s tyrants. Most will be far from home for the holidays.

In the case of the U.S. Coast Guard, Alaska, the name of the game is air/sea rescue, and they are the best in the world.  Operating in the often-violent Bering Sea, the 2,500 members of Coast Guard Alaska patrol over 43,500 miles of coastline conducting maritime rescues, drug interdictions, distributing humanitarian aid, and fisheries control.

Celebrating its 150th year in Alaska, the Coast Guard last year performed 19,790 search and rescue missions saving 3, 560 lives and over $77 million in equipment. The force is equipped with the veritable HC-130 Hercules long range aircraft backed up by medium range (300 miles) helicopters capable of hoisting six people to safety.

Mariners know they can depend on the brave members of Coast Guard Alaska when lives are on the line. Can our active duty servicemembers count on you for support when they need it? Support Our Troops salutes these brave American as they are a symbol of our nations heart and generosity.  Last year, Support Our Troops delivered over $40 million of tangible support to America’s military servicemembers with 97 percent of every dollar spent on services.

You can help us send a little bit of comfort to our deployed servicemembers this holiday season by joining the thousands of Americans who make monthly contributions to Support Our Troops' Patriots Brigade®. Please visit our secure website https://supportourtroops.org/donate to donate to America’s finest today!