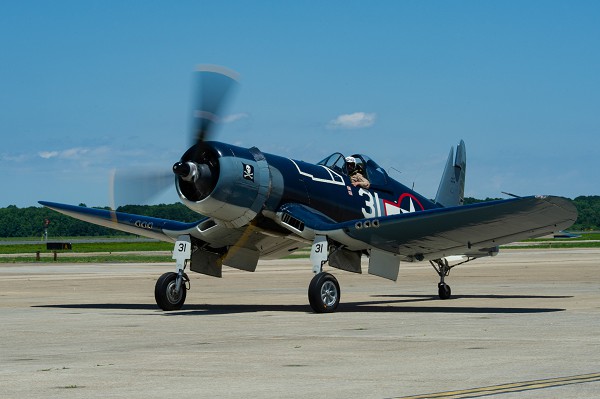 Virginia Beach, VA. (November 30, 2022): In this photo by MC3 Megan Wollam, an FG-1D Corsair, flown by Mike Spalding, Chief Pilot at the Military Aviation Museum, taxis after a heritage flight with Strike Fighter Squadron 103 onboard Naval Air Station Oceana. The Corsair was once assigned to the famous “Jolly Rogers” Fighter Squadron VF-17 in 1943 and shares the same call sign. These flying buccaneers downed 154 Japanese airplanes in just 76 days of combat earning them the grudging respect of their enemy who called them “Whispering Death”.

Virginia Beach, VA. (November 30, 2022):  Their symbol was the pirate’s skull and crossbones, and Japanese pilots called them “Whispering Death. The Navy’s Jolly Rogers squadron terrorized the enemy during World War II and continues to intimidate America’s adversaries to this day.The story of the Jolly Rogers begins in 1943 as the Navy adopted the Vought F4U Corsair fighter as a trainer for new pilots preparing for combat in World War II. While an excellent airplane for training, the Corsair was difficult to fly, particularly off an aircraft carrier. The Navy decided to deploy the Corsair in land-based squadrons in the Pacific Solomon Islands and, as they say, the rest is history.

Led by Commander Tom Blackburn, the pilots of Navy Squadron VF-17 wanted an emblem to paint on their fuselages that matched their name,  Corsair or pirate, hence the adoption of the famous white skull and crossbones on a black background as the squadron’s symbol. Their name, Jolly Rogers completed the pirate theme.

Commander Blackburn, unlike many stodgy Navy leaders of the time, did not discourage the somewhat unruly behavior of his pilots as he wanted men who were fearless for the job at hand.

Like their swashbuckling namesake, the Jolly Rogers scored the highest number of enemy kills of any such Navy unit during the war, even exceeding the better-known Marines “Black Sheep” squadron commanded by “Pappy Boyington” whose exploits were later celebrated in a popular T.V. show. In all, Navy Squadron VF-17 downed 154 Japanese airplanes in just 76 days of combat earning them the grudging respect of their enemy who called them “Whispering Death”.

The Jolly Rogers live on as Strike Fighter Squadron 103 located onboard Naval Air Station Oceana in Virginia Beach, Virginia  and they are flying the Navy’s newest strike fighter the F/A-18 Super Hornet. The squadron’s call sign is “Victory,” and they remain an intimidating force for America’s enemies.

It takes great skill and courage to pilot high performance aircraft in combat and we at Support Our Troops salute these brave aviators. Our mission is to provide these servicemembers with “what they need, where they need it” through our Yellow Ribbon Care Packages and the recreational opportunities we provide for deployed troops. You can do your part by contributing to our Patriots Brigade to help send comfort items to boost their spirits during the holidays? Please visit our secure website https://supportourtroops.org/donate to donate to America’s finest today!