Meet Your Military: Airman Helps Others as Chaplain's Assistant 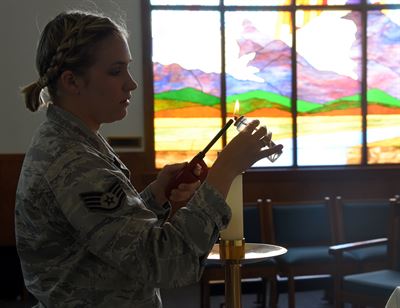 "When I became an instructor it was different; the rules and regulations were so strenuous," Hoyt said. "I had to retrain my brain to realize I could only help and be involved in the lives of the [airmen] to a certain extent."She said the Air Force wanted to protect the students and the instructors from developing unprofessional relationships, but in so doing she felt they created a lot of walls where she couldn't properly mentor anymore.

Time for a Change

"I wasn't able to take care of my people, and I realized that is one of the things I do best," Hoyt said. "It was then that I knew it was time for a change."In her search for a way to help, she discovered her calling as a chaplain's assistant."I talked about the idea with my husband, and we went back and forth on the thought for about a year," Hoyt said. "Eventually, I knew it was the career for me."Applying to be a chaplain's assistant is a long process Hoyt said. Everyone, from her commander down to her spouse, was interviewed to ensure she could keep 100-percent confidentiality regardless of the situation."I waited for the decision for three months," Hoyt said. "I finally received notification I was selected to be a chaplain's assistant, but the Air Force Personnel Center would not allow me to leave."Hoyt had an assignment availability code 50, which meant she was not allowed to move from her stateside base until she had a minimum of four years at station.

"I was really blessed to have the superintendent I did at the time," Hoyt said. "As soon as I mentioned [the situation] to him he told me, 'Grace, that is where you need to go; that is what you are meant to do."'She said her superintendent was able to help with the AFPC issue and the code was dropped."My code 50 was removed and I was approved to cross-train, but there were no more available slots left," Hoyt said. "I checked a few weeks later, and there were three slots open."According to Hoyt, the technical school to be a chaplain's assistant was the hardest thing she ever had to go through mentally.

"I had to figure out who I was," Hoyt said. "A lot of the training was a self-assessment of who we are, mentally and spiritually. There were times I would leave class crying, not knowing if I wanted to do this anymore."During the class, prospective chaplain's assistants were paired one-on-one with chaplains."I was paired with a Catholic priest from Africa, and he would encourage me to keep going," Hoyt said. "I came out so much stronger and more understanding [of who I am as a person]."The biggest job of a chaplain's assistant is religious accommodation, Hoyt said. Chaplain's assistants, she added, play an important role in the well-being of the airmen, from being available during personal matters to managing important ceremonies in the lives of the airmen.

"People think my job as a chaplain's assistant is to throw religion in their face, which is not the case," Hoyt said. "My job is to facilitate religion, and make sure all airmen are spiritually and mentally fit."She said building trust is a big part of a chaplain assistant's one-on-one counseling sessions with individuals who need it."I get a lot of people who just want to vent," Hoyt said. "People can tell me whatever they want, and I can never tell anyone."At the end of the day ... I know I have made the right decision," she continued. "This job is much more fulfilling.”

Written April 26, 2016. Republished and redistributed by permission of DoD.